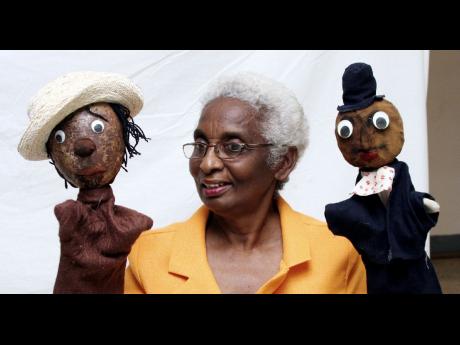 When Dennis Scott invited Jean Small to teach at the Edna Manley College of the Visual and Performing Arts, he asked her to devise a course. She came up with two, Caribbean Language and Folk Forms. However, she said, "At the same time, Professor Rex Nettleford was teaching Caribbean Culture. We found there was an overlap of content. Dennis Scott said I should collapse my two courses into one, and that's how I created Caribbean Lab."

"That was a great breakthrough. For what I was trying to do was create a Caribbean aesthetic for theatre. Analyse it. Games. See how people are onstage, how you can adjust the game. That was very successful, 'till people tief it and don't say Jean Small start it," she said.

It is not the only pioneering theatre role she lays claim to. Small exclaimed, "I taught theatre by television all over the island. Nobody has done that!" The students in Trelawny, Westmoreland, St Ann and Kingston, could see her but she could not see them and she said "that was an interesting experience".

She did her first puppet show for her son Seretse's first birthday. It was recorded and when she watched the tape, Small was amazed at how enthralled the children were. While she was teaching at Immaculate Conception High, she broke out the puppets for a particularly unresponsive class and got a breakthrough.

Then, "one summer I was broke and needed a car part. I went to the Pegasus (hotel) and asked them if they wanted a puppet show". The hotel's representatives eagerly said yes and, with Seretse helping, she put on the show, at first once a week then went up to thrice weekly as the popularity grew. "We had children lined up around the Pegasus," Small said.

Small said that she makes her own puppets and now has funding from CHASE for her 'Puppets for Peace' project.

"I do values and attitudes through puppets," she said. And she added, laughing, "I want to do a risqué puppet show for adults."