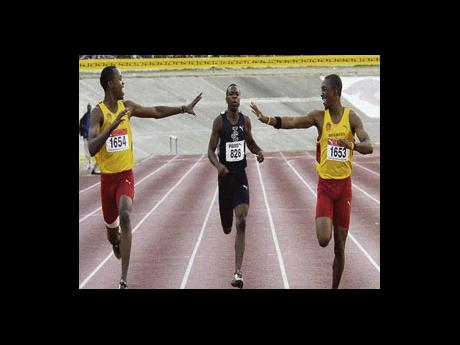 ONE HUNDRED years of Boys' Championships have come and gone and in a funny twist of fate, the team which was crowned the first champions, again reigned supreme on the event's centenary celebration.

It was as if their fate was destined by God.

Since 1910, when they won the first championships, the boys who sport maroon and gold in their flag and in their hearts, had only won Boys' Championships 11 times. Now make that 12!

With a memorable evening of sprinting, the Wolmer's boys gambled big with their stars and outstripped perennial favourites Kingston College and Calabar, by testing those stars, putting them through gruelling combinations of events. Combinations that threatened to spoil their chances of individual glory, but the unselfish act of the team's captain Dwayne Extol - allowing his teammate to win the Boys' Class One 200 metres - displayed the character and spirit of the team.

It wasn't about them. It was about the 208.5 points they needed. And needed it they did, as the last race began with second-place Calabar tied with the champs on 198.5.

This morning, those boys, with sore muscles, will wake up with a smile nonetheless, as the memories of last night will be etched in their minds for as long as those minds continue to tick.

But the wind didn't just blow maroon and gold for the boys, as Holmwood Technical which happens to sport the same colours, retained the Girls' Championships title.