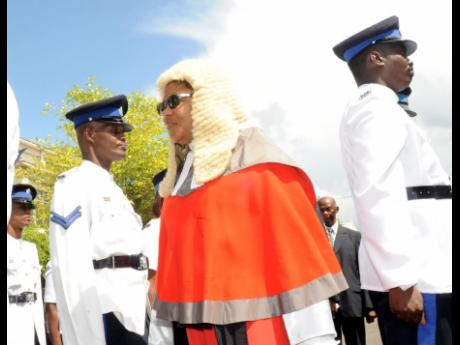 Chief Justice Zaila McCalla inspects the guard of honour during the opening of the Home Circuit Court on King Street in downtown Kingston last year.

Fear, absent witnesses and a culture of delay blamed

THE CREAKING justice system is burdened under the weight of over 400,000 cases waiting to be tried.

Resident Magistrate's courts, the Supreme Court and the Court of Appeal account for these cases, with no mention of the thousands languishing before the petty session bench.

It is a problem that all stakeholders agree must be addressed urgently if the voices demanding justice are to go silent.

The numbers tell the worrying tale and leave the public to wonder if the local authorities know the often-repeated truism, "justice delayed is justice denied".

Absent witnesses, fear and a culture of delay are being blamed for the backlog.

The Hilary session of the Home Circuit Court in downtown Kingston opened on January 7, with 376 cases listed for trial. That list had 206 murder cases and 124 sexual offence cases.

When the session ended on Friday, March 26, it was disclosed that 61 cases had been disposed of and 396 traversed to the next session, which starts on April 7.

That is a problem which Jamaica's first female chief justice, Zaila McCalla, appears determined to address.

Opening the Hilary session, McCalla issued a strong warning to the major players in the justice system.

"There will no longer be a situation in the courts where witnesses turn up only to be told that the cases cannot be tried."

The chief justice also advised defence lawyers not to set several cases for trial on the same day.

She said there were now four additional criminal courts, and the expectation was that when a case came before the court, it would be tried.

According to McCalla, there was going to be a change in the Gun Court list, and the culture of delay in that court would no longer take place.

She announced that plans were to be put in place for there to be case-management conferences in criminal cases in an effort to shorten criminal trials.

The case-management conferences began in January and are held on Fridays.

Three persons, Lisa Palmer-Hamilton, senior deputy director of public prosecutions, Nadine Flowers, Crown counsel, and Howard Hood, case-progression officer, have been given the responsibility for the preparation of the criminal cases.

They told The Sunday Gleaner that while there were "teething pains", these could be addressed in due course.

But absent witnesses continue to pose a major problem, leaving the case-management team searching for creative ways to address this issue.

According to the team, they have asked investigation officers to find the witnesses, and have resorted to placing advertisements in the newspaper and on television.

The absence of witnesses is blamed on several reasons, with fear being close to the top of that list.

"Fear is a big factor in light of the current crime situation where witnesses have been killed in suspicious circumstances.

"When we look at the statistics for this term, the fact of the matter is, even if the prosecution is able to make a significant dent in the list one term, it is taken away by the number of new cases we get the next term," Palmer-Hamilton said.

She argued that 30 cases could be disposed of in one term and the next term, 40 cases are added to the list.

"But if case management works and is as effective as it ought to be, in two years, there should be a significant reduction in the court list because we will be able to sift some of the matters out of the system," Palmer-Hamilton said.

She said a task force had been set up to deal with cases which fall under Section 31 (D) of the Evidence (Amendment) Act - that is, cases where the witnesses are dead, cannot be found, or have migrated.

According to Palmer-Hamilton, situations where cases are not moving, the prosecution will enter nolle prosequi (no prosecution) or offer no evidence.

Defence lawyer Ravil Golding agrees that the criminal case-management conference could lead to a speeding up of the process.

"It seems to be working and will help to reduce the backlog," Golding told The Sunday Gleaner.

He noted that case-management conference was introduced several years ago in the Supreme Court to assist in the speedy disposal of those civil cases.

Fellow defence lawyer Vincent Wellesley has pointed to the length of time it takes to complete a preliminary inquiry in the Gun Court section of the Corporate Area Resident Magistrate's Court.

According to Wellesley, it is taking too long to dispose of these cases and bail is seldom granted to the accused.

He noted that sometimes it takes up to three years to dispose of preliminary inquiries.

Wellesley argued that more judges needed to be assigned to the Gun Court.