Dressing down for court 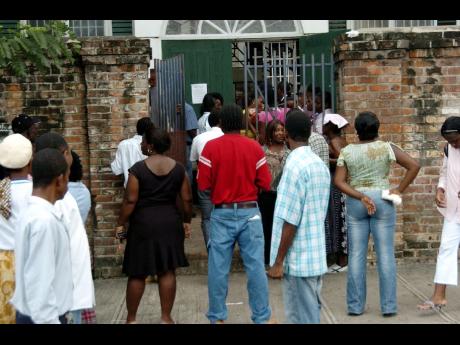 No longer the need to put on the finest suits and dresses ...

AT MID-MORNING on Thursday, the Civil Court on Sutton Street, downtown Kingston, is in full swing, names being announced at the requisite volume and pitch that gives the occasion a sense of authority and the persons involved in each case taking their positions.

In this Civil Court, there is obvious tension and anxiety, but no palpable raw fear.

While the dress is within the parameters prescribed by the law - those who disobeyed the clearly stated rules would have not been allowed into the courtroom anyway - no one is decked out to the hilt to face the judge.

If dress is an indication of the respect persons have for the court, bailiff for Kingston and St Andrew, Augustus Sherriah, has seen that level of respect decline over the years.

He started working as an assistant bailiff in 1973 and tells The Sunday Gleaner: "Once upon a time when people go to court, the men wear a suit, women wear their 'Sunday best'."

However, Sherriah says, "Things have changed", and puts the current situation in the context of the wider society.

"Even at the Supreme Court where it is expected that people wear a suit, people will wear a shirt and tie. First time they would provide you with a jacket (if the person turned up without one)," Sherriah said.

That 'appropriate' dressing for men includes shirt tucked in and buttoned up and excludes merinos and bare shoulders. Women cannot wear anything too revealing.

Wayne Thomas has been an assistant bailiff with the Civil Court since late 2005. He has seen the attire of persons on both sides of a case - accused and complainant - and says that many of the accused believe if they dress "the judge will give them a chance". So there are many occasions when "the accused dress like a lawyer. They are so polite, unlike when they are in the street".

The most extreme case Thomas has seen is a street boy who turned up in court in a three-piece suit, complete with inside vest and suspenders.

"Obviously he has people, but him want to be in the street. When they find out that he is going in front of the judge them put him in a suit."

Then there is the accused woman who dresses like a lawyer in a tailored skirt suit.

He estimates that 75 per cent of accused persons will adhere to the basic requirements of the dress code, while 95 per cent of complainants will come appropriately attired.

The worst state of dress that Thomas has seen was a man who attempted to enter the courthouse in is tight, cut-off jeans and slippers. He also remembers one woman who turned up with her stomach and navel piercing exposed, push-toe slippers, and the tattoo over her breast showing.

"She couldn't even pass the first gate," Thomas said.