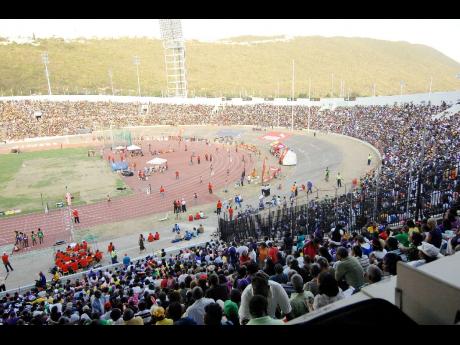 Final day of Champs 2009. Each year, the Girls and Boys' Championship games, held at the National Stadium, brings sports enthusiasts from near and far together in a pot-pourri of fashion, colour, style and performance. - Ian Allen/Staff Photographer 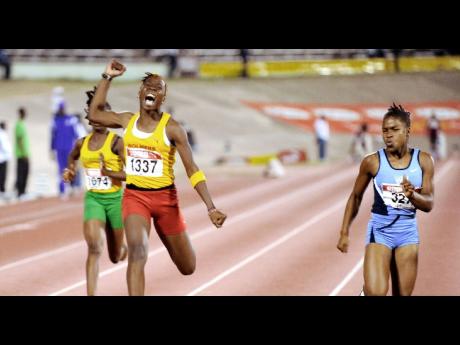 Left: A Wolmer's Girls' athlete is triumphant in victory during the Girls' Class 3 100m final on Day 3. 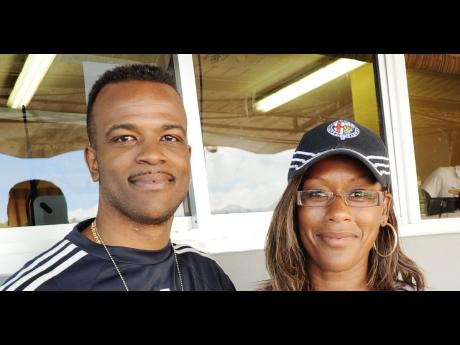 Die-hard Champs fans Stan (left) and Jacqueline Edwards celebrated their wedding anniversary at the stadium on Friday, Day 3 of the 100th staging of the Issa GraceKennedy Boys and Girls' Championships. - photos by Ricardo Makyn/Staff Photographer
1
2
3

FULL FLIGHTS and the sold-out hotel rooms were early signs that scores of Jamaicans living overseas were making the annual trek home for the ISSA/GraceKennedy Boys and Girls' Championships.

In fact, the 100-year anniversary of this prestigious event has drawn not only Jamaicans, but some athletics lovers from across the globe. Trained on us are the lenses of the international media. The British Broadcasting Corporation (BBC) was numbered among those watching the games and tracking the development of athletics in the home of the world's fastest man - Usain Bolt.

Champs has become an institution that holds far-reaching significance for many Jamaicans and is a must-see for many who are now living beyond the shores of Jamaica.

They are among the most ardent of supporters of their respective schools. Draped in their school colours, they embody the very essence of the championships and symbolise the never-ending appeal of the meet, which is regarded by most as the greatest of its kind in the world.

Once such traveller is Donna McKenzie, who has been living in the United States for more than 14 years and has missed only one Champs since then.

As she does each year, McKenzie sat high in the grandstand on Friday afternoon, where she was joined by the rest of her pro-Kingston College (KC) friends.

The fact that she was obviously not a past student of the all-boys school seemed to have been lost on McKenzie, who, while donning purple garb, spoke proudly about her love for the North Street-based school and her dedication to the four-day meet.

"This (Champs) means everything to me. I really enjoy track and field and I look forward to coming here every year," McKenzie said. "Track and field means so much to me, it's like a part of me for the longest while. When I was going to school, I loved it but it didn't love me back, so I became a fan."

The Maryland resident explained her support for Kingston College, pointing out that she had never supported another school and that she had been a keen admirer of the attitude and commitment of KC athletes over the years.

"Well, I attended Kingston Technical, but while growing up, all the boys on my road in Harbour View where I grew up went to KC and I just developed a love for KC. When you watch the boys, they have so much heart. You have to give them credit for that, they have this remarkable bond," McKenzie added.

Glen Morrison has been living in New York for two decades and like his good friend McKenzie, has made returning to Champs somewhat of a pilgrimage over the years.

"Champs means so much to me. When I think about Champs, this is my Olympics. I have never been to an Olympic Games. I got the chance twice, but have never been to one; but for me, Champs is the biggest event, as far as I'm concerned," added McKenzie.

Canada-based couple Stan and Jacqueline Edwards made it quite clear who they were supporting, as they sat wrapped in the royal blue of Jamaica College (JC).

The Edwardses, who celebrated their wedding anniversary at the stadium on Friday, have been coming to the meet all these years and consider Champs an important part of their yearly activities.

Jacqueline was born in Jamaica but migrated to Canada at an early age and fell in love with athletics while at high school there.

"I met him (Stan) 23 years ago, but since the day we met, he has been talking about Champs. There is not a day that goes by that he does not mention Champs since I met him. This is the 22nd Champs that I'm attending and the progress just in terms of the coordination of the event and the calibre of the athletes and the passion of the spectators, I have never seen it anywhere else," said Jacqueline.

Stan, who represented JC at Champs from 1979-1983 in the 110m hurdles and 400m hurdles events, took his time, but managed to concede that his team was unlikely to win this time around.

"We try to come down every year but we missed out two years, but this is definitely something that we look forward to every year. This year's Champs is a wide-open one; there is no clear favourite and that makes it even more exciting. KC is the defending champion and they are strong. Unfortunately, they may win, but we (JC) happen to have suffered injuries to key players at a bad time, but hopefully, we can get some things in place by next year," said Stan.

Immaculate alumni Tracey Robinson was also happy to be back home.

Unlike the others, Robinson didn't bother to sport her school colours, but was anything but silent when asked about her love for the meet and her alma mater.

"I have been away from Jamaica for about 10 years but was always a fan of Champs. I made the special effort to come this year because of the significance of the 100th staging and all that, and I must say I am really enjoying myself," said Robinson.