An oasis in the desert 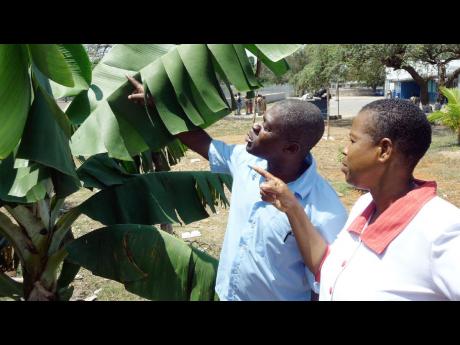 Hyacinth Rochester (right), principal of Tredegar Park All-Age School, and Christie Smith, chairman of the school's intervention management commitee, examine one of several banana plants in the school's vegetable garden. The garden was established as one of the school's projects geared at reducing the problem of high absenteeism at the institution. - Philip Hamilton photo

An oasis in the desert is how one could describe the Tredegar Park All-Age School located in the volatile St Catherine community after which it is named.

Attendance at the school has been down over the past year as a result of gang conflicts involving armed men from Tredegar Park and the adjoining Gravel Heights community.

Many of the students who attend the school are from the nearby communities of Tawes Pen, Waterloo and Lauriston, which have seen their fair share of violence.

Hyacinth Rochester, principal of the school, admits that absenteeism is a major problem, with some children present for as few as 90 out of the 380 sessions each year.

By September 2009, the enrolment had dropped to 573, with the daily average attendance being 83 per cent.

Figures from the school show that last month, only 560 children were enrolled, with a daily average attendance of 63 per cent.

Residents of the community have blamed the decline in attendance on the frequent outbreaks of gang violence.

But the principal argues that violence is not the only factor.

She says several parents have lost their jobs and can no longer afford to send their children to school.

Tredegar Park is one of 100 primary schools across the island with poor student performance linked to high absenteeism following an 18-month study started in 2008 by the University of the West Indies' School of Education.

The Ministry of Education's target is for schools to have at least a 90 per cent attendance rate.

Responding to the findings, researchers from the School of Education, led by Director Dr Zellyne Jennings-Craig, worked with the administrators of Tredegar Park to form an intervention management committee.

This committee included community members as part of an effort to find solutions to the absenteeism problem.

This resulted in the establishment of Tredegar Park's poultry-rearing programme and its vegetable garden.

Rochester says the project almost did not get off the ground, as some persons felt it was doomed to fail given the volatile nature of the community.

"When it started in 2008, things were hot. Some felt we should never build a chicken coop, as it would encourage people to steal. I'm glad we never listened, as people have been full of praise for the project."

Tredegar Park resident Christie Smith chairs the intervention committee and works as a watchman at the school.

He says the poultry project, which is now rearing its ninth batch of chickens, receives tremendous support from the community, particularly the women, who were eager to participate.

"When we started, there were more ladies than men involved in preparing the spot for the coop. The men eventually came on-board with the construction of the coop and the fence, which they built free of cost."

But Rochester is not satisfied with the level of participation by the men.

"We have many young men who are not doing anything. We need some strong men on the farm to assist us with the ploughing. But sometimes they are afraid to come because of the gang wars between Tredegar Park and Gravel Heights."

In the meantime, the children have been drafted in to support the project by cleaning the chicken coop and assisting with the planting of the vegetable garden.

Produce from the vegetable garden is used by the school's canteen, which provides lunches for needy children, while excess crops are given to children to take home.

A beautification project has also been established at the school as one of the intervention strategies proposed by the committee.

Rochester says since the intervention project, the school has seen improvements in its grade four literacy test scores, despite the irregular attendance.

She says the school is doing its best to be as self-sufficient as possible, although it could do with some more help.

"Right now, we need a computer lab and a library. We have a fund-raising drive going on, because if we don't get one from the Ministry of Education, we're going to do it ourselves," said Rochester.

"We can create an environment here for the children that can give them the exposure they need and show them a better life, but we cannot do it if we don't have the tools."