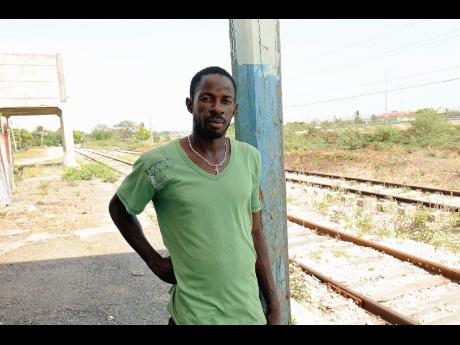 Rudolph Peterkin has the job of securing the train station in Old Harbour, St Catherine.

Rudolph Peterkin's hands are white with dough as he speaks to The Sunday Gleaner at the train station in Old Harbour, St Catherine. It is time for the noon meal and he is making dumplings, each delivery of a white orb into the boiling water resulting in a slight 'plop'.

His job, securing the train station after vandals had started to make off with parts of the building, requires that Peterkin lives there. His personal taste dictates that he makes it home, complete with curtains and the necessary facilities.

Peterkin told The Sunday Gleaner that he has been the security officer since October 2009 and has lived at the station since November. "The building ya, them did a scrap it, take off the whole of the board, all of the upright. The head security come here and say them want somebody here, so me end up here," he said.

"A 24 hour me deh pon, so me really move in, fix up here and make it look like a home. We a Jamaican still. We make Hell look good," Peterkin said. "Me born and grow down here, but me well known, so no man nah go too violate. Eventually, if me wasn't here, you wouldn't see anything."

Included in the work he did was painting the building and putting in glass windows. He does not know how long he will reside there and said he could move "at any given time. Them want to lease out the building to some people, but it no really happen yet. It can be five, six months".

Peterkin opens the door from the kitchen area and shows The Sunday Gleaner the extensive cargo section.

Fewer than 100 metres from the Old Harbour station, the highway and the vehicles that whizz along it are a contrast to the silent place where the trains once had a major chunk of the land-transportation pie.