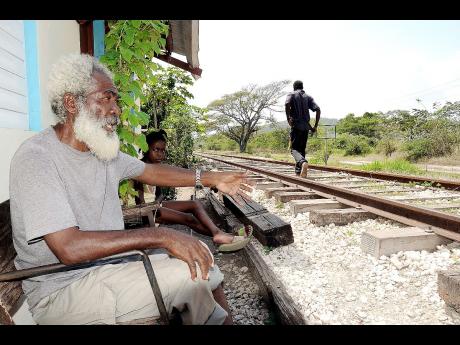 Gatekeeper Lyndon Turner ... 'If is not it, I don't eat'. - photos by Ian Allen/Photographer

He is required to do far less than he once was, but Lyndon 'Red Peas' Turner is dutifully at his post near the gate where the train line crosses the road in Bodles, Clarendon. It helps that he lives a few metres away from the gate and he is sitting in a chair and leaning against the wall of his home when The Sunday Gleaner sees him close to midday.

He has performed his gate opening and closing duties that day, Turner explaining that although the line is not currently in use, an engine is used to check the line at regular intervals to ensure that it is in good condition for when bauxite sales pick up again.

After spending three years in Spanish Town, he has been posted in Bodles for 26 years. Before, he says, "I was doing very little work". He offered to help someone working in the train service with odd jobs and would be given a "cigarette money" in return, "till the boss give me one day and two day till it giving me, till it still giving me, thank God".

There is an eight-hour turnaround time on the bauxite trains when the mining operations are up and running, Turner saying, "When it late, you say 'wonder if anything happen?'" Once there was 'something wrong' near his post, but Turner still looks mystified by the fatality which resulted. "I left some men over there and after the train pass, go back and them say Tom dead. Me say 'Stop yuh noise'," he said. But there really had been an accident.

He half-smiles as he remembers an accident he was in on the line when the motorised trolley he was riding on collided with a push trolley travelling in the opposite direction. "Everybody kincap, but my trolley did not kincap," he says. One woman died in that accident and other persons were injured. "I may be the only one living from that now," he said.

Turner recalls, too, how men who did not have any money would tell him that they were going on the train at the crossing. "You can't too hard on them," he said. In Spanish Town he assisted men who wanted to get to Montego Bay. Then "I buck up one of them in MoBay already and him say 'You no remember me?' Him say is prison him was coming from that day".

"You have to know how to live and live good," Turner said.

Having known the days of the steam engine when he travelled by train with his mother and given nearly three decades service to the Jamaica Railway Corporation, Turner smiles as he says he has enjoyed his job.