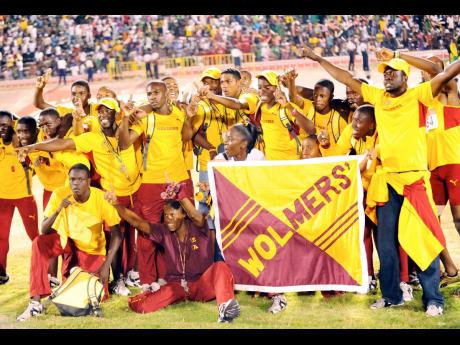 Members of the Wolmer's Boys' team celebrating at the National Stadium last night after their famous win at the 2010 ISSA/GraceKennedy Boys and Girls' Championships. Wolmer's who only sealed victory in the last event, the 4x400m open, scored 208.5 points to finish ahead of Calabar High and defending champions Kingston College.- Ricardo Makyn/Staff Photographer 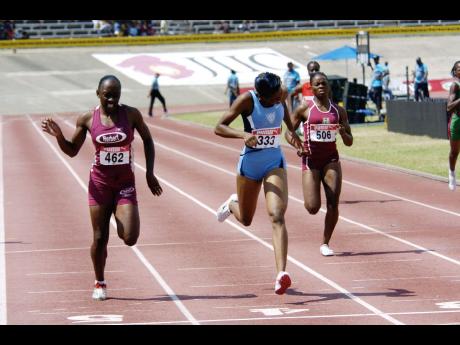 FIFTY-FOUR years in the wilderness came to a glorious end for Wolmer's Boys School at the 2010 ISSA/GraceKennedy Boys and Girls' championships last night.

The maroon and gold-clad Heroes Circle-based school secured their 12th lien on the title after tallying 208.50 points at the National Stadium.

In the girls' championships, the Holmwood machine rolled on after the girls from Christiana in Manchester held off a stiff Edwin Allen challenge to secure their eighth consecutive hold on the coveted crown. Holmwood powered to 273.33 points, just over 15 more than their Frankfield-based neighbours who closed on 258 points.

Heading into the final event, the 4x400m open, tied on 198.50 points with Calabar, the Wolmer's quartet finished second in 3:12.10, behind Vere, 3:10.81 and in front of Munro, 3:13.93. More importantly, they secured 10 points to Calabar's three after the latter could only manage seventh; meaning that 'Champs' had come full circle, as it was Wolmer's which claimed the very first championships 100 years ago in 1910.

In the girl's section, Holmwood Technical held on despite a spirited late evening Edwin Allen charge.

Edwin Allen's management lodged an appeal on the result of the Class Three girls 4x100m, which was won by Holmwood in 45.97, citing that Holmwood's first baton exchange was completed outside the designated zone. A positive ruling would have favoured the Frankfield-based team but it was not to be as Holmwood ran away with their eight straight title.

Holmwood claimed the Class Three sprint relay in 45.97 with Herbert Morrison a distant second in 47.30 and Convent of Mercy (Alpha) finishing third in 45.97. Class Four was won by Edwin Allen in record time, 47.58, bettering the 47.64 established last year by Holmwood. Wolmer's was second in 47.79 while Hydel ran third with a similar time.

The boy's discus Class Two went to Calabar's Oshane Chamber who threw 50.75m to set a new mark in the event. Kingston College's Chadrick Dacosta was second with a distance of 50.13m while Federick Dacres finished third with 49.42m.

Wolmer's speedster Odean Skeen was the quickest in the highly anticipated Class Two boys 200m final, clocking 21.40 to get the better of Delano Williams, 21.47, and an injured Jazeel Murphy (Bridgeport), who limped to 21.48 for third.

The Heroes Circle-based school was at it again in Class One, where
Julian Forte, 21.32, and teammate Dwayne Extol, 21.38, finished first and second
with Manchester's Brandon Tomlinson, 21.57, running third.

With pre-championships Class Two 110m hurdles favourite Stefan
Fennell crashing out of the event at the semi-final stage, Wolmer's Yanick Hart
claimed the gold medal in 13.95 ahead of Manchester's Omar Graham, 14.35, and
Kemar Williams 14.48.

Calabar suffered a setback in an eventful Class One 110m hurdles
final, when Duece Carter, with a clear lead on the field crashed into the sixth
hurdle and ended up being disqualified, while his teammate Jerome Myers failed
to finish. The event was won by Wolmer's Kamal Fuller in 14.17 seconds with his
teammate Kevaughn Allen finishing third on 14.50 in what was a key moment in the
boys' title race. KC's Lemmar Wilson was second in 14.47.

The result pushed Wolmer's into the lead with 136 points, 19 more
than Calabar with 22 finals left to contest at that stage.

Meanwhile, Calabar strong-man Chad Wright won yet another gold
medal at the championships, winning the Class One shot put with a distance of
18.22m ahead of Ashinia Miller (Calabar), 17.72m and Munro's Onyia Emmanuel,
16.56m.

Wolmer's Dwayne Extol ran his heart out in the Class One boys 400m
final, stopping the clock on 47.43 with a powerful run from lane eight. Vere's
Demar Murray was second in 47.53 while teammate Jermaine Gayle secured the
bronze on 47.61.

Carifta U-17 winner Lennox Williams of Manchester, claimed the
Class Two 400m crown in his first year in the class, winning the event in 48.25,
ahead of St Elizabeth's Demar Levy, 49.10 and St Jago's Omari McDonald, 29.24.

The Class One girls 400m was claimed by Edwin Allen's Ristananna
Tracey who won with a time of 53.85, getting the better of a fast-closing
Antonique Campbell, 53.91, who came into the event as many pundit's favourite.
Holmwood's team captain Petra Fanty was third in 54.61.

In the keenly contested girls Class Two 400m final, Vere teammates
Shericka Jackson and Olivia James traded the lead for much of the contest before
the former pulled away in the last 20m to claim the gold medal in 53.74, her
fastest time of the season with James posting 53.99 for second. Manchester's
Sandrae Farquharson was third in 54.50.

Holmwood's Chris-Ann Gordon ran 53.62 to win the girls Class Three
400m ahead of Vere's Yanique McNeil, 55.00, and St Jago's Yvonna Grant who
clocked 56.20 for the bronze medal. Gordon claimed her second individual gold
medal of the championships a couple hours later in the
800m.