I will be fine 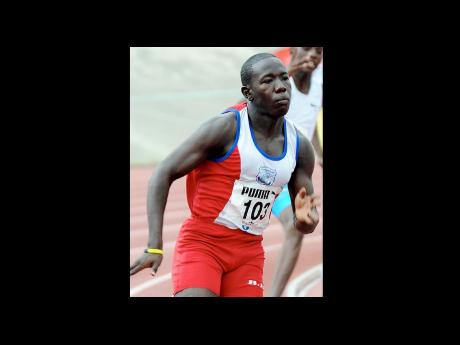 When Bridgeport speedster Jazeel Mur-phy grabbed his hamstring and limped towards the end of the boys' Class Two 200 metres final at the ISSA/GraceKennedy Boys and Girls' Championships at the National Stadium yesterday, many feared the worst for the young sprinter who was looking to defend the title he won in 2009.

Murphy entered the final with the fastest time, 21.19, and after claiming the sprint double last year, many hailed him as the island's next great sprinter; and if that wasn't enough, his 20.97 clocking at the Carifta Games last year made him the fastest local junior in the event spanning all classes.

Murphy has been a no-show for much of the season because of the problematic hamstring, but was recently named to the Jamaica's 70-member Carifta Games team. There are now concerns over his ability to compete at the meet which gets underway in the Cayman Islands from April 3-5.

The 16 year old is, however, confident that he will recover in time for the event.

Said Murphy while being treated in the National Stadium's medical room, "I'm sure I can make it to Carifta and I know that I'll be there, I just need to rest my hamstring again."

"It's (injury) not serious, it just grabbed me a little close to the end of the race but I don't think it is anything major," Murphy added.

The youngster expressed disappointment at not being able to defend his crown but was happy with his returns considering the turmoil he has had to endure for the last few months.

"I knew I had the injury but I was just trying to see what I can do," said Murphy. "Yes, I am disappointed not to win the event but I tried my best so I'm happy with the result."

The event went to Odean Skeen (Wolmer's) in 21.40 with Munro's Delano Williams running second with a time of 21.47 seconds.