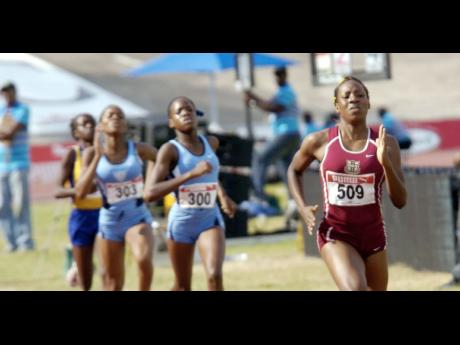 Holmwood Technical's Chris-Ann Gordon would have been one of the surest gold medalist in the 100th staging of the ISSA/GraceKennedy Boys and Girls' Championships had she not been injured for most of the season.

She came into the meet on the back of only one individual 400 metres race at Central Championships where she still managed to outclass her rivals to win in a time of 55.0 seconds.

Yesterday, she again put all of her setbacks behind her to whip her opponents when it mattered most as she easily took the Class Three girls 400m in 53.62. Vere Technical's, Yanique McNeil (55.00) finished second while St Jago's, Yvonna Grant (56.20) took the bronze medal.

Gordon who underwent surgery for appendicitis was immensely thankful to God at the end of the race.

"I have to give God thanks because this season I did not get the chance to train the way I wanted to because I had a minor surgery which had me lagging behind, so I just came out here and did enough to win," said Gordon. I just want to thank God for giving me all the strength and endurance to complete this event because if it wasn't for him I wouldn't be right here today," she added.

The 15-year-old was out for six weeks after her surgery and did not resume training until February. She was doubtful that she would be able to win at Champs due to the setback and hence felt relieved that she was able to contribute nine points to her school's cause.

"I am feeling really good because my school need the points to take the victory today."

She was not finished there, however, as she returned two hours and 20 minutes later to capture her second gold medal, winning the Class Three 800m gold in 2:12.03, the Edwin Allen pair of Marleena Eubanks (2:13.55) and Sanikee Gardner (2:14.42) finished second and third, respectively.

"I feel happy knowing that I have also won the 800m, I got a little bit of a challenge on the second lap from Edwin Allen but in the end I came home," Gordon shared before rushing off to prepare for her final race of the day, the 4 x400m open.