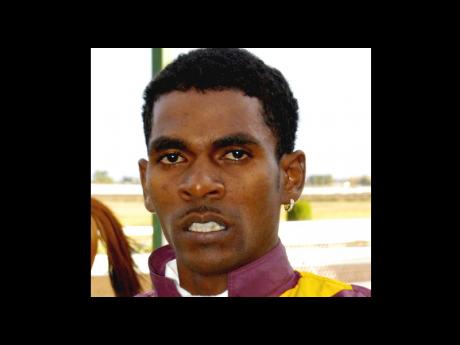 ROLL THE DICE, running at odds of 7-1 and SKIPAWAY PRINCE, highly fancied at 2-1, won the co-feature races on yesterday's Jockeys' Guild Day 10-race programme at Caymanas Park, both in decisive fashion.

In the Jamaica Jockeys' Guild Trophy race over 1400 metres for five-year-olds and up (non-winners of two), ROLL THE DICE went by the leaders COLORADO BABE and HARDWAR PRINCE approaching the home turn and held on well by 11/2 lengths from the fast-finishing 13-1 shot LUX and the 8-5 favourite ROYAL DREAMER in a field of eight.

A five-year-old mare by Hail Orphan out of Jamaica Gold, ROLL THE DICE was ridden by lightweight jockey Peter 'Pam Pam' Bryan for part-owner and trainer Fitzgerald Richards.

Later in the afternoon, in the closing race on the card, 2-1 chance SKIPAWAY PRINCE made all the running under champion jockey Omar Walker to win the annual renewal of the Al Gopie Memorial Cup over the straight five course by 21/2 lengths from SEA TRAVELLER, who chased him from a long way out in a field of 14 maiden four-year-olds and up.

The race was run in memory of popular lightweight jockey Al Gopie, who was killed in a spill leaving the half mile in the penultimate race at Caymanas Park on Saturday. November 20, 1999.

The 3-5 favourite RAJAH, racing for the first time and backed as if defeat was out of the question by virtue of his glowing exercise reports, failed to go the early pace and his fate was obvious from some way out, finishing a poor seventh.

A lightly raced 4-y-o gelding by Skipping out of Seattle Sunrise, SKIPAWAY PRINCE is co-owned by Elvin Duncan and Edgar Llewellyn (also the breeders) and trained by Gregory Bucknor.

Walker, the leading rider, extended his lead over closest rival Paul 'Country' Francis by taking the last double comprising FLUFFY and SKIPAWAY PRINCE to push his season's tally to 27 - eight clear of Francis who rode one winner in 3-5 favourite COUGWAY.

American-bred FLUFFY, one of two winners for champion trainer Wayne DaCosta, assumed the lead from MY BREDREN at the halfway stage in the 1400-metre race, breezing home by 4 3/4 lengths from CAT FOR A KING and evens favourite BELOW THE WAIST, who stumbled badly on the inside (twice) approaching the home turn, almost going down.