Big victories for Chelsea, Man U but Arsenal draw 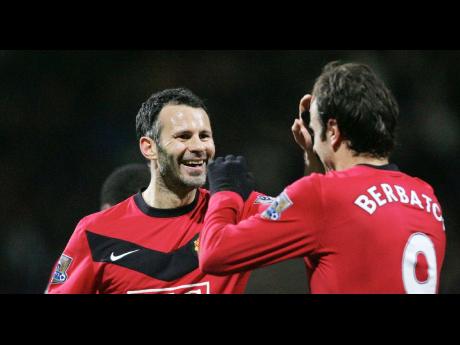 LONDON (AP): Manchester United retained top spot in the Premier League by routing Bolton 4-0 yesterday after Chelsea thrashed Aston Villa 7-1 to remain within a point of the defending champions.

Dimitar Berbatov scored twice either side of Jlloyd Samuel's own goal and substitute Darron Gibson's late strike to keep United on course for a fourth straight title.

But Chelsea have a superior goal difference after an emphatic display against Villa, which saw Frank Lampard score four to become the club's third-highest all-time scorer with 151.

Third-place Arsenal, though, slipped four points off the pace after being held to a 1-1 draw by Birmingham.

Tottenham strengthened their grip on fourth place as Peter Crouch and Niko Kranjcar scored in a 2-0 victory against former club Portsmouth, which is bottom and doomed to relegation.

The other two teams in the drop zone are Burnley and Hull. Hull moved level with West Ham by beating Fulham 2-0 as the 17th-place Hammers lost 1-0 at Stoke. Next-from-bottom Burnley host Blackburn today.

Wolverhampton went five points clear of the bottom three by drawing 0-0 with Everton.

Both United and Chelsea easily coped without their top scorers, with Wayne Rooney and Didier Drogba not used.

United did rely on Samuel's own goal to go ahead just before half-time, with the Bolton defender inexplicably slotting Ryan Giggs' deep cross beyond his own goalkeeper.

Berbatov tapped in United's second after the break after Jussi Jaaskelainen was unable to hold Darren Fletcher's strike.

Nani was the creator for Berbatov's 12th goal of the season and the in-form Portugal winger also teed up Gibson for United's fourth.

At Stamford Bridge, Lampard netted his first after 15 minutes by turning Florent Malouda's low cross past Brad Friedel at the far post.

But Chelsea's Yuri Zhirkov allowed John Carew to ghost into space at the far post to meet Ashley Young's curling cross and level for Villa.

Zhirkov made amends just before halftime when he earned a penalty after being fouled by Villa defender James Collins.

Lampard converted the spotkick and there was no way back for Villa as Chelsea added five more after the break in an ominous prelude to their FA Cup semifinal meeting in two weeks.

Lampard scored again from the penalty spot - converting after Zhirkov was fouled by Richard Dunne - in between Malouda's two goals.

"I missed a couple of penalties in training on Friday," Lampard said. "I know Brad Friedel is a top keeper and they can save them if they go the right way, so I wanted to put my foot through it."

"So sorry to every Villa fan after that appalling performance," Collins wrote on Twitter. "I'm embarrassed to call myself a footballer after that rubbish ... sorry."

Arsenal's performance at Birmingham was a shadow of Chelsea's. Arsenal manager Arsene Wenger's introduction of Nasri and Andrei Arshavin with 20 minutes looked to have paid off when Nasri fired in from 20 metres. But in the first minute of added time, an attempted clearance in the box struck Phillips and the ball looped back over goalkeeper Manuel Almunia into the net.

"I thought we were closer to scoring the second goal than to losing 2-1," Wenger said. "We were a bit naive and not killer enough. The last thing we wanted was a free kick and unfortunately we were punished. The pitch is a massive handicap - you can't play football on it."

There was another meeting of FA Cup semi-finalists at White Hart Lane with Harry Redknapp's Tottenham cruising past his former club, Portsmouth.

But the bottom-place club has mounting injury worries ahead of that Wembley Stadium clash in two weeks. Goalkeeper David James limped off, while both Hermann Hreidarsson and Danny Webber were stretchered off.

Hull's hopes of not joining Portsmouth in the second tier next season were boosted by its victory over Fulham.

Hull's breakthrough came when striker Jozy Altidore was wrestled to the ground in the penalty area by Chris Smalling and Jimmy Bullard netted from the spot. Craig Fagan headed in Hull's second at the start of the second half.