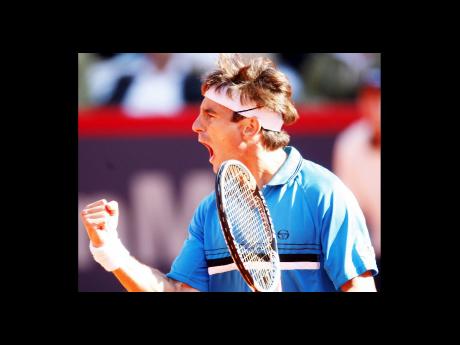 "This is the best win of my life," jockey Tiago Pereira said. "It's unbelievable."

The race was the highlight of Saturday's eight-race, $26 million programme at the newly opened Medyan Racecourse. Despite the economic slowdown, Dubai's rulers shelled out $2 billion to construct two racetracks, a grandstand that holds 60,000 spectators, a 290-room luxury hotel, a marina and a horse-racing museum.

The event drew many of the region's rich and famous, and they were treated to a thrilling finale that more than made up for last year's dominant victory by Well Armed, who finished 14 lengths ahead of Gloria de Campeao.

As the favourites faltered, Gloria De Campeao sped out early and maintained the lead throughout despite the strong finishes by Lizard's Desire and third-place Allybar. The finish was so close that Lizard's Desire jockey Kevin Shea initially started celebrating before being told he had fallen short by a nose.

Bary said the key to the victory "was the heart" of the horse.

"If he's alone after he's taken the lead and no one comes after him, it is so difficult to catch him," Bary said. "He wants to fight."

In the earlier races, the Dubai royal family showed they remain a force when it comes to horse racing.

Al Shemali was not expected to challenge the favourites Presvis and Alexandros, and was given 40-1 odds in Britain of winning. But he came on toward the end and outran Bankable.

"It was a pleasant surprise but the stable had been in terrific form and I knew he'd stay," Al Shemali's jockey Royston Ffrench said. "It was the case of getting a clear split and we got it. It's the most prestigious win of my career."

It was the third victory for the royal family in the eight races, including the $1 million Godolphin Mile by a horse from Sheik Mohammed's Godolphin Racing stables.