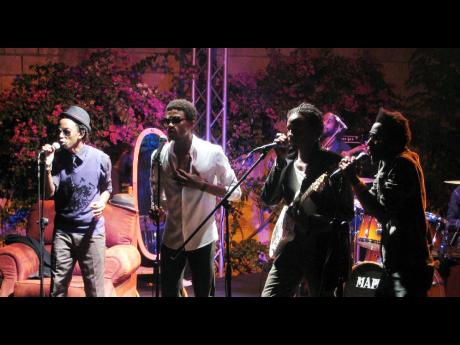 The wait for the No-Maddz poetry quartet to start The Trod Live concert and live album recording last Saturday night, well past the slated starting time, was interminable, what with the fine-tuning of the technical details for the one-time recording. Once Sheldon Shephard, Everaldo Creary, Chris Gordon and O'neil Peart (the last also on guitar) started their fusion of the spoken and sung word for a very enthusiastic audience (the ladies, especially) at Finnigan's Winery, Cranbourne Avenue, St Andrew, it was a blast.

Literally, sometimes, the band and the poets (Peart also a very expressive singer who showed his range in the second segment of the concert) took a generally high-energy and uptempo approach to the fusion of poetry and music. So in large part it was a danceable affair, the pace slowing to a steady groove at the beginning of the post-intermission segment where the women were placed squarely front and centre - and they loved it.

In the beginning, the stage set with a mirror (in front of which Shephard adjusted his attire before), a couch (in which Gordon relaxed) and a candle which Creary lit, Peart with his guitar at the ready, the No-Maddz fused their voices in sound that might have been produced by an agitated owl and a cuckoo giving voice in tandem. It brought the audience to extra attention, the poem built around a refrain of "wha dis?!", as well as word play that skirted a Jamaican expletive. The final line was the encouragement "rise above profanity" and The Trod Live was on, Shephard having most of the lead duties at this point.

They were soon "trodding Jah road" where "all elders get salute" and the observations in It's Justified, where various perpetrators attempt to explain away their misdeeds. The Kingston College old boys paused to congratulate Wolmer's on their Boys' Champs victory, but from there, save for a 10-minute break, it was a non-stop concert for well over two hours.

The early pace told, jackets abandoned to allow for more freedom of movement as well as cooling purposes. The acting background of the No-Maddz served them well in their stage movement and their material for the women put them in good stead. Lions Playing in the Prairie gambolled around with the lioness, they paid homage to money ("make money work for you like a sweatshop") and took a wry look at corporate Jamaica ("boss inna me skin each and every day").

Peart sang the refrain of Junior Murvin's Police and Thieves to start off No-Maddz dancehall take on "bad boy Ricky", who turns out to be a policeman. They stepped lyrically harder through a weed-smoking encounter with a policeman in traffic and an encounter with a gangster in a tough neighbourhood, his love of their lyrics smoothing the way in the latter.

There were the crowd-pleasing antics as well, Peart capping off a dancing display by the members in turn with a near split. And it was also Peart who ended up smashing a guitar into the stage which other members had pretended they were going to destroy. It was explained that it is Chinese made.

After the break, which came a few minutes after midnight, the audience was coaxed from the bar and conversation by the guitar, low and slow, and it was definitely the ladies' time. They yelped for many a line, including "when I kiss her it taste like bulla and pear" and when the vocals went bass with a deep "oh baby".

When they opened another poem with "so me press her against a wall" the ladies screamed and, with The Trod Live looking to turn the corner for the home stretch, the audience was in it for the long haul with No-Maddz.