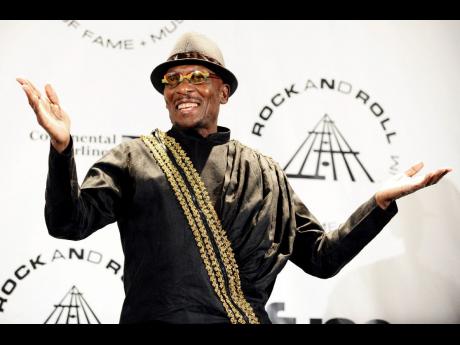 Jamaican reggae singer Jimmy Cliff has gained two of music's highest honours - a Grammy and an even rarer Rock and Roll Hall of Fame induction. But for Cliff, one lacks the real sentiment it's supposed to hold.

"The Grammy (award) is something I never exhibit," said Cliff, who won for his 1985 album Cliff Hanger. "I have an exhibit of the Rock and Roll Hall of Fame. They (Grammy) didn't exhibit giving it to me. When I will acknowledge that it is something to be exhibited is when the world can see you accepting it. Who ever see a Jamaican accepting a Grammy?" he questioned.

"I don't know how it's done. I don't see nothing on TV. You are told that you have won and I suppose it's sent to you. For this (Rock and Roll Hall of Fame) one now, it's very different. It was shown all over America and England. It's a very big public thing. As most people know and say, it even surpass the Grammy. Very few people can get to the standard they (Rock and Roll Hall of Fame organisers) have set."

Cliff's tinge of resentment with The Recording Academy, which hosts the Grammy Awards annually, resonates among reggae musicians and executives. Apart from the presentation of the 'Best Reggae Album' not being included in the main programme, the nominees have long been questionable.

In a recent interview with The Gleaner, Cristy Barber, vice-president of marketing and promotions at VP Records, said "The only people voting in the reggae category are those who are not in the know" and "the few who are actually voting do not represent our industry." Barber's comments came prior to this year's ceremony as she went on a drive to register more Jamaicans as voters.

Cliff, whose musical accolades number in the dozens, said his Hall of Fame induction on March 15 in New York was a special moment not only for him, but Jamaican music.

"I think it gives Jamaican music a lift to another status. I received the trophy but I am a receiver for the people. Where would I be without all these people, so I receive it on their behalf," the 65-year-old singer told The Gleaner.

Cliff's fellow inductees were musical giants ABBA, The Stooges, The Hollies and Genesis.

Motivated to do more

Cliff added that the induction has only motivated him to do more work, particularly with a new album on the horizon.

"This is the finale of act one. Now I am about to start act two with the emergence of this new album I have called Existence," he said.

Cliff said the music for the album is complete but the final touches are now being added. He predicted that it would be released between June and August. Immediately after its release, he said he will go on a promotional tour in North America. He also has plans of including a date for Jamaica, as the last time he performed in the island was five years ago at Rebel Salute and at an event that was held at the University of the West Indies.

The consummate entertainer, Cliff is known for his spirit-filled performances, something, he said, that is absent from most current artistes' repertoire.

"They have a problem because they are not aware that they need to practice. I practice my dancing. I practice my movement. I practice my presentation. So, if you want to be a real artiste, that's what you have to do. It's a disciplined thing," he said, making reference to acts such as Sting and Rolling Stones.

Almost 50 years since his first hit song, Hurricane Hattie, Cliff remains as busy as ever. He said he has plans to work on a movie called Whappy King, which he hopes will begin filming by the end of the year. He said there are also plans to do Centre Stage, which is less developed, and the sequel for The Harder They Come, which he played the lead role for in 1972. Cliff is also in the process of recording Goal, which is a song for the 2010 FIFA World Cup.

The ebullient Cliff said he sees another 50 years ahead of him.

"I've never seen myself not being in this business. I have never envisioned that. I am a songwriter, singer, actor, producer and dancer. So, I have all of those that I am doing. If I am not doing one, I am doing the other. What I will get tired of is doing the same thing the same way all the time. I am still very hungry to do things," he said.

"Most people who received it (Rock and Roll Hall of Fame), they are finished. Me? I am just starting. I plan to go on for at least another 50 years."

With such longevity another Grammy might be in the mix and maybe this time it will be televised for all to see.