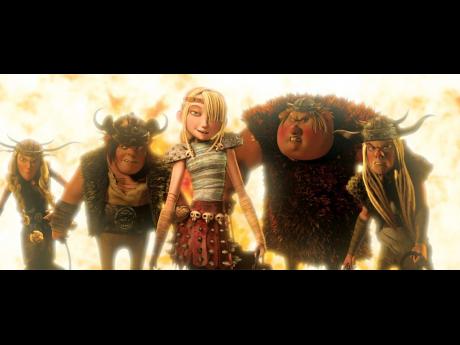 In this film publicity image released by Paramount Pictures, Astrid (foreground), voiced by America Ferrera, is shown in a scene from 'How to Train Your Dragon'. - AP

How to Train Your Dragon breathed a bit of box-office fire with a US$43.3 million opening weekend and a number one debut, according to studio estimates yesterday.

Distributed by Paramount, the DreamWorks Animation adventure came in well behind the studio's last cartoon comedy, Monsters vs Aliens, which opened with US$59.3 million over the same weekend last year.

With strong reviews and enthusiastic responses from viewers in exit polls, DreamWorks expects How to Train Your Dragon to have more staying power than Monsters vs Aliens in subsequent weekends, though.

How to Train Your Dragon, featuring the voices of Jay Baruchel and America Ferrera in the tale of a Viking youth who tames a fire-breathing reptile, did outperform some other recent animated movies, among them Cloudy With a Chance of Meatballs, which opened with US$30.3 million last September.

Disney's Alice in Wonderland, which had been number one the previous three weekends, slipped to second place with US$17.3 million. It raised its domestic total to US$293.1 million and its worldwide haul to US$656 million.

John Cusack's raunchy comedy Hot Tub Time Machine had a lukewarm number three debut of US$13.7 million. Released by MGM, the movie features Cusack as part of a group of losers hurled back by a time-travelling hot tub to the 1980s, where they have a chance to set their lives right.

How to Train Your Dragon pulled in 68 per cent of its revenue from 3-D presentation, another triumph for the digital technology that allows theatres to show movies in three dimensions.

Yet, it also highlights the limits on how much 3-D traffic theatres are equipped to handle. How to Train Your Dragon took over the bulk of 3-D theatres at the expense of Disney's Alice in Wonderland, because the roughly 4,000 screens capable of showing digital 3-D movies is not enough to handle two full wide-release films at the same time.

"There's no question there are not enough screens yet," said Chuck Viane, head of distribution for Disney. "People who want to seek out 'Alice' in 3-D may have to travel a mile or two more than they used to. ... It's competition. I'm used to it."

After a phenomenal 15-week run, James Cameron's blockbuster Avatar lost most of its remaining 3-D theatres to How to Train Your Dragon. The 20th Century Fox release finally fell out of the top 10, taking in US$2 million to finish at number 11, raising its domestic total to US$740.4 million. Worldwide, the movie has taken in US$2.7 billion.

Another new 3-D release, Warner Bros action tale Clash of the Titans, arrives Friday. While the success of 3-D movies has driven theatre chains to speed up their conversion to systems that can project digital 3-D films, a screen shortage will remain for the near future.

"There is a limited amount of shelf space. It's like a traffic jam at the multiplex for these 3-D movies," said Paul Dergarabedian, box-office analyst for Hollywood.com. "It's a high-class problem to have, but it's still a problem."

Films playing in 3-D have topped the box office for nine of 13 weekends this year, Dergarabedian said.

Overall revenues were down for the first time in a month. Domestic receipts totalled US$127 million, off 13 per cent from the same weekend last year, according to Hollywood.com.

Results for Hot Tub Time Machine came in on the low end of distributor MGM's expectations.

"It's not great, but it's OK," said Erik Lomis, head of distribution for MGM. "It had a lot of Internet buzz, so we thought it might come in a little bit higher."

Directed by Atom Egoyan, Chloe stars Julianne Moore, Liam Neeson and Amanda Seyfried in a drama about a woman who hires a prostitute to tempt her husband and find out if he's cheating on her.