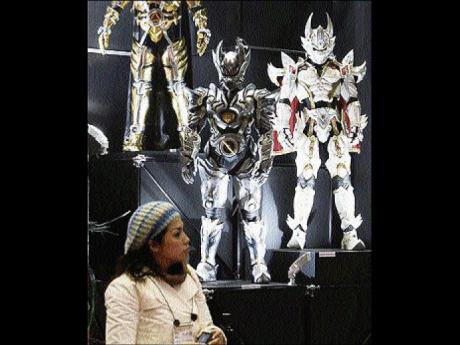 Yoko Komazawa had been at the Tokyo International Anime Fair for nearly six hours when she fell in love with a brown and white stuffed panda - a character in one of the fair's featured cartoons.

"It's so adorable and interesting," she said, staring into its gleaming pink eyes. "I want it."

Unfortunately, the panda wasn't for sale and Komazawa had to settle for a photo. But she walked away from the small booth impressed by the panda's creators - from China.

"Japan is certainly an amazing anime country," said the 30-something anime fan and collector of all things cute and cuddly. "China has some intriguing characters though. They're different, and that definitely catches my attention."

Komazawa's enthusiasm for something new is a small victory for China's fledgling animation industry, and could well represent a widening crack in Japan's global anime dominance. Japan may be the birthplace of anime, but China is gunning for its future as it mounts an aggressive effort to expand the country's creative prowess and reputation.

In November, the government's cultural arm established the China Animation Comic Group Co to foster a "great leap forward" in animation production, technology and marketing. Part of the plan includes building a 'China Animation Game City' in Beijing that would serve as a national hub.

With government subsidies, Chinese animation companies tripled their presence at this year's Tokyo anime fair even as the overall number of exhibitors declined. The four-day event through to yesterday, one of the world's biggest anime-related trade shows and festivals, featured a 'China-Japan Anime Summit', along with multiple China-themed lectures.

"China is a big market, and everybody is trying to get in," said Jimmy Tse, chief executive of Top Art Investment Limited, which makes the panda Komazawa craved. "And the Chinese people, they are starting to think, 'How come I'm manufacturing for someone else?' Why are we not creating anything ourselves'?"

After peaking in 2006, the number of anime minutes made for television fell 20 per cent to 108,342 in 2009, according to the Association of Japanese Animations. A survey of the group's members shows that overseas anime revenue fell 21 per cent between 2006 and 2009.

Matt Alt, a Tokyo-based author, blogger and long-time observer of Japanese pop culture, blames the industry itself for losing its edge. The world's hunger for anime accelerated around 2000, with Hollywood incorporating anime scenes into films and children clamouring for Pokemon.

Since 2006, however, a trend towards adult-oriented (and often sexually explicit) niche titles have turned off the general audience. Moreover, the industry is losing young talent due to persistently low pay and poor working conditions, forcing Japanese animation companies to outsource much of their work.

"The Japanese anime industry basically gave China, Korea and all these countries the keys to the candyshop," Alt said. "By outsourcing so much work to them, they trained this workforce of people who are now far more ambitious and far more hungry than a lot of Japanese animators are."

The man behind the Tokyo anime fair acknowledges that the global anime boom has waned. But chief producer Hitoshi Suzuki brushes off suggestions that foreign competition poses a threat, expressing confidence that a new boom will emerge in time.

Japanese animation is rooted in a rich 60-year history that cannot be replicated elsewhere, he said, citing the work of Astro Boy creator and "godfather of anime" Osamu Tezuka.

Different or not, the Japanese anime industry is beginning to realise that it cannot ignore China - as an emerging rival or a potentially lucrative new market. For both countries, cooperating appears to be the best option for now.

One of the most successful joint projects so far is the 'Romance of Three Kingdoms,' a historical animated series currently airing across China. The programme, produced by Japan's Takara Tomy and a subsidiary of China Central Television, will begin airing soon in Japan and elsewhere in Asia.

Chinese start-ups are also actively courting Japanese content makers for their business. A representative from the online video site joy.cn, China's version of Hulu, travelled to the Tokyo anime fair to convince Japanese companies that the Internet offered an alternative to mass media - subject to tight government restrictions - and that their copyrights would be protected in the process.

"It's a time of great change right now," said Yuji Nunokawa, chairman of the Association of Japanese Animations and a veteran anime producer. "We need to determine how we can work together to foster the contents business. We've come to a point in time where both sides need to think about how we can do this."