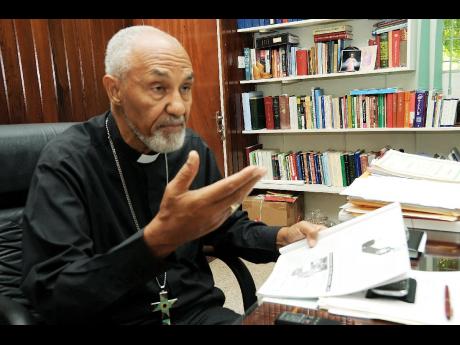 Archbishop Donald Reece says paedophilia is a psychological problem, not a spiritual or moral one. - Ian Allen/Photographer

While condemning the cover-up of child sex-abuse cases involving Roman Catholic clergy globally, Archbishop of Kingston, the Most Reverend Donald Reece, says paedophilia should be treated as an irreversible psychological problem and not necessarily a moral or spiritual failing.

Reece, who is the head of Jamaica's Roman Catholic community, acknowledges that the church's system of dealing with child sex abuse - by sending priests on 30- or 40-day therapeutic retreats - was short-sighted and wrong, leading to the development of institutional secrecy.

The church leader argued that paedophilia has a psychological imprint which can never be cured.

"It's just recently we have come to appreciate that paedophiles are incorrigible. It's in-built into their system from puberty; there is no way they can be reformed, just like an alcoholic," Reece told The Gleaner.

"It (paedophilia) is not a spiritual thing, it's a natural thing in their system. If you put a paedophile in a nursing home with adults, he performs well. But don't let a child cross his path, or he goes bananas, bonkers," he said, adding that the reassignment of clergy did more to fuel, rather than fix, the problem.

His comments come at a time when the Catholic Church has been stung by a series of paedophilia cases in Europe whose magnitude could rival revelations that rocked the denomination at the turn of the century. Criticism has come closer to the Vatican, as Pope Benedict XVI has been accused of mollycoddling paedophile priests under his purview, including in his homeland Germany, when he was archbishop of Munich. There have also been tens of thousands of cases reported in Ireland.

Reece said he empathised with victims of sexual abuse: "Hopefully, those who have been abused will get healing, ... to the point they can integrate, without being crippled." The archbishop argued that Roman Catholic clergy were no more culpable than their Protestant counterparts. He also said Catholic dioceses have come under assault by litigation lawyers who were intent on pillaging the church's purse by leading a smear campaign.

"If somebody from a (religious) parish were to be accused of molesting a child, when he is taken to court, it's not only that person's resources that are tapped, it's the entire diocese's."

Reece said the failure to rein in sexual predators under the church's umbrella had been rooted in taboo, where parents and church officials swept cases under the carpet, thus protecting priests from prosecution and preserving victims' dignity.

"Society allowed these things to happen. It was condoned, in a way," he said.

Reece said no cases have been reported in the Jamaican archdiocese under his watch - dating back to April 2008 when he succeeded the late Lawrence Burke - and that he had no knowledge of any instances before his tenure. The archbishop deflected questions about why the local church had not launched an exploratory probe in Jamaica, arguing that no investigation was needed unless cases were reported.

He was however adamant that he would take action if priests sexually abused children here.

"I can't swear for anybody, but if it comes to my attention, I will be going to the police."

Reece said the local Catholic Church has a review board, comprising about 10 people from the Montego Bay, Kingston and Mandeville dioceses, which investigates allegations of improper clerical conduct and makes recommendations to the hierarchy for action.

The Holy See, the central government of the Catholic Church, has insisted that no more than five per cent of its clergy globally has been involved in child sex abuse over the last 50 years, a number it says is comparative to, or less than, instances in other denominations.