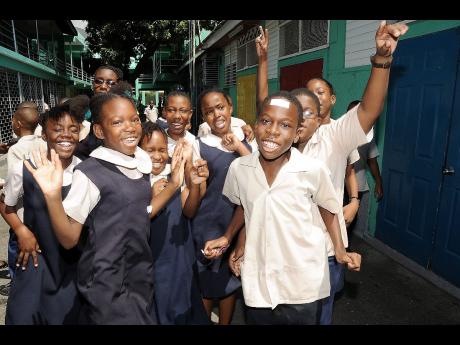 The emotions on their faces suddenly transformed into brilliant smiles, as they breathed a sigh of relief, on leaving their classrooms at Vaz Preparatory School, Kingston, on the second day of the Grade Six Achievement Test (GSAT) last Friday.

The Vaz students are among the almost 48,200 who can now rest easier after sitting the examinations.

"I feel relaxed because I know that it is finally over," Tasian Tuitt, told The Gleaner as he stepped out of the examination centre.

Tuitt said in preparing for the GSAT he had put aside some of the activities he enjoyed.

"I am going have fun with my brother and I will be watching more TV," the 11-year-old said with a broad smile.

Tuitt also said he was confident about recording a high score because he had dedicated many hours to studying.

Leon Wright, who is also a student of Vaz Prep, was equally elated that the GSAT was over.

Wright, who has his eyes set on a placement at Campion College, said he too missed out on a lot of things during the period of preparation.

"I am so relieved because my mother and father were pressuring me really hard to study " he said.

And what of his plans now that the examination is over?

"I can do what I want now until the results are out, so I will be watching TV and playing video games to catch up on the fun times I missed out on," he said.

The parents were equally elated.

"I am happy it is over and I know my hard work will pay off. It was a long stressful period and I need to get some rest," said Tanya Williams parent of Leijeigh Williams of Vaz Prep who waited patiently on the school compound for her son to exit the exam room.

For Renaldo Egla of Rollington Town Primary the exam was challenging but manageable.

He said now that he doesn't have to undergo a rigorous study regime he plans to have fun.

When The Gleaner visited the Windward Road Primary School in Kingston, students were in an equally jubilant mood.

"I am excited and relieved because I can finally sleep and not beating the books at late hours." Densley Williams said.

He intends to play more games and watch television.

Students elated that the exam is finally over