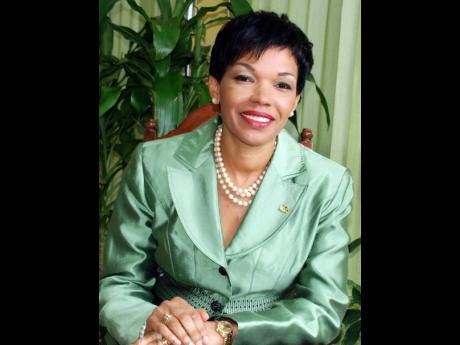 THE GOVERNMENT has received commendation for its choice of businesswoman Audrey Marks as the country's ambassador to Washington.

The confirmation was imme-diately met with applause, with business leaders and diplomats telling The Sunday Gleaner that Marks would be an asset to the country.

"In addition to her business success, she is ever on the forefront of showcasing Jamaica's com-pelling opportunities through meaningful domestic and inter-national associations. We are delighted to have her in Washington, DC, said Christopher Anand, managing director of Tavistock Group, which is slated to conduct the multimillion-dollar Harmony Cove development in Trelawny.

He noted that Tavistock first learnt about Jamaica as an investment possibility from Marks.

"She is smart, astute, has a clear grasp of the critical issues and a good understanding of how Washington works," said president of the Jamaica Employers' Federa-tion Wayne Chen.

"It also goes without saying that a dynamic and vivacious young woman will project a refreshing new image of Jamaica in the world's most important capital," Chen added.

Minna Israel, head of RBTT Bank, quoted Ralph Waldo Emerson as she welcomed the appointment of Marks: "Do not go where the path may lead; go instead where there is no path and leave a trail." According to Israel, Marks is an example for all women striving for successful lives.

"There are pluses and minuses in career versus non-career diplomats. The latter comes with a strong relationship with government that can be beneficial in negotiations, but you also have to learn a lot," she noted.

According to Cobb, non-career diplomats offer a fresh view that is good.

LaGrange Johnson said she was thrilled for Marks and had confidence in her ability to do a great job.

"She will add some special spark to the assignment. Like her, I came from the private sector to diplomacy, and that experience will make her transition smoother. Women are good for government, and being the first female in that post will mean a lot for other women," LaGrange Johnson said.

Former US Ambassador to Jamaica, J. Gary Cooper, endorsed Marks while arguing that she could prove to be one of the most effective ambassadors in Jamaica's history.

"The combination of her personality, business acumen and tact will serve her well," he said.

That was echoed by executive director of AmCham, Becky Stockhausen, who worked with Marks while she spent three years as president of that organisation.

"During her AmCham presi-dency, she interacted with influential leaders both locally and overseas. Her resourcefulness and skills are evidenced by the respect she enjoys as a visionary and entrepreneur whose leadership has resulted in one of the most successful businesses in Jamaica, Paymaster," Stockhausen said.

She is married to professional engineer Jassel Dunstan, and they have two daughters.

Her record includes starting and operating six previous businesses, including farming, transportation, real-estate sales and a development and venture-capital company with diverse investments, including manufacturing, travel and entertain-ment activities.

Marks is no stranger to world affairs and has been described repeatedly as a "pro-United States activist who is happy to embrace the challenge ahead".

She gave some insight into her thinking on some of the solutions for Jamaica's problems in an article in The Sunday Gleaner of October 5, 2008, titled "Trade and Negotiation: keys to Jamaica's economic development". (See Gleaner online for article.)