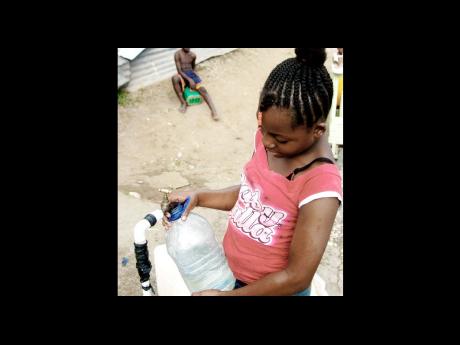 A girl catches water at a standpipe in the Bucknor community located just outside of May Pen, Clarendon. This pipe supplies the entire community. - Ricardo Makyn/Staff Photographer

The very rich, the rich, and the not-so-rich mostly all have additional water storage tanks attached to their regular piped water supply. The very poor, the poor, and the not-so-poor, don't.

As a result, when the National Water Commission (NWC) locks off water from time to time in a vain attempt to save on water consumption, they discriminate against the poor, because these people are in fact the only ones who are inconvenienced. For the rich, an automatic trip-in of their storage tank provides continuous water supply and they are not even aware when there is a lock-off.

About three years ago the NWC adopted a revolutionary policy of turning down the water pressure (rather than cutting off the supply completely), which proved to be so successful in reducing the outflow from the dams, that they were able to boast at the end of the year that there had been no need for locking off water during the drought that particular year, as they were able to maintain adequate levels in the dams. Unfortunately they did not build on that, but instead reverted to the archaic and heartless system of depriving their clients totally of water (and, as you know, their own slogan says 'Water is life!')

That approach spawned a mushrooming of brand new plastic storage tanks scattered throughout the land, as it encouraged householders to provide for their own needs when, as it now became inevitable, the NWC eliminates water from the pipes without notice or planning. As I indicated, their method may spur the poor to conserve water, but not so with the other half of society.

If you think of it, you'll see that water lock-offs are extremely wasteful. Many times some individuals will try a tap during the lock-off period, find there is no water, and forget to turn off the tap. When the pressure comes back untold gallons of water go to waste, gushing from the already open tap. Also, doesn't the NWC have to pay additional wages to numerous workers who have to lock off and turn back on the mains at odd hours?

Many of the underground pipes throughout the system are leaking, so when the pressure drops in the pipes muddy water seeps into them from outside, and that comes rushing to your tap when they resume the water supply. In that situation there is no discrimination as all of us are then subject to the attacks of E. coli and other bacteria. Additionally, weak, rotten pipes, many of them underground, rupture under the repeated assault of fluctuating pressures.

In Jamaica today the total stored supply of water in a variety of private storage tanks is probably about equal to whatever supply there is remaining in the dams, but that private storage will never become available to the poor, nor will it likely be totally used up by the rich.

The NWC should re-establish the policy of turning down the pressure rather than implementing complete lock-offs.