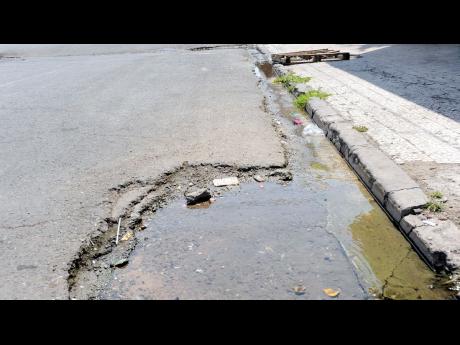 A broken main distributor of the National Water Commission (NWC) at the intersection of Beeston and King streets, downtown Kingston, has been causing much of the scarce commodity to go to waste. A resident of the area told The Gleaner that the leak has been ongoing for several months. The NWC has admitted that the old water-distribution system has been contributing to the number of leaks islandwide. The issue is of even more concern now because of the current drought. - Norman Grindley/Chief Photographer.

A trial date has been set for the four persons, including a police sergeant, who are charged in connection with the seizure of 19 guns and thousands of rounds of ammunition stolen from the constabulary force's armoury.

The four, who remain in custody, will be tried in the Gun Court on June 7 and 8.

On Friday, the court was told that the defence was served with all the relevant documents in the case.

The accused are Sergeant Russell Robinson, Charles Morris and David Blagrove, civilians attached to the police armoury, and businessman Garnett Pennington, who is believed to be the owner of the premises on Munster Road, eastern St Andrew, where the seizure was made in February.

It is being alleged that 18 firearms were found inside a motor vehicle which the policeman had driven to Munster Road. One firearm and 10,200 rounds of ammunition were allegedly found inside the house at Munster Road.

Following the seizure, acting Commissioner of Police Owen Ellington ordered the immediate closure of the police armoury and police stores on Elletson Road in east Kingston.