We did it the Wolmer's way - Riley 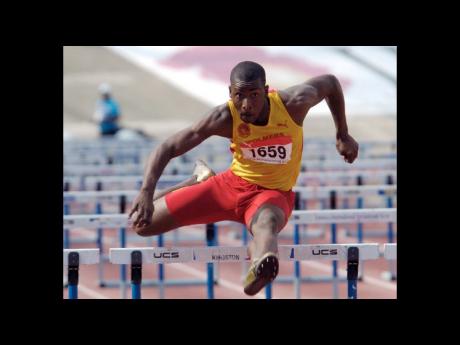 Yanick Hart of Wolmer's on his way to winning the Class Two boys 100 metres hurdles final at the National Stadium on Saturday. - Ricardo Makyn/Staff Photographer

"We won it the Wolmer's way." Those were the words of Wolmer's boys team coach, David Riley, after his team's hard-fought victory over Calabar High at the ISSA/GraceKennedy Boys and Girls' Championships at the National Stadium on Saturday night.

The 39-member strong Wolmer's team scored 208.50 points to outlast Calabar, who closed the championships on 201.50, after the two were locked on 198.50 points heading into the final event, the 4x400m open relay.

Riley credited the triumph to the entire team's commitment to their policy of quality over quantity.

"We didn't go for entering in every discipline and people were saying we didn't have a chance because we don't have throwers and we don't have any middle distance (runners), but we have proven to every single pundit in this country that you can actually build specialisation in different areas," Riley shared.

"We don't have to do everything to win Champs and I say to all of the little schools out there; keep working at your programme, don't follow anybody else just do your own thing ... We have done it the Wolmer's way and we will continue to do it this way for years to come."

The obviously elated Riley pointed out that he was not surprised at the outcome of the championships and shared that when it came down to the mile relay, he had no doubts that his maroon and gold-clad warriors would return the Mortimer Geddes trophy to Heroes Circle, 54 years after it last went there.

"It (victory) is not surprising for me, we knew from the end of Champs last year that we had a team that could score 200 points and whether 200 points would win Champs or not would be based on the health and strength of the other teams. But we knew that we had a great Class One team; (we knew that) we would have a great Class Three team and definitely today's win is no surprise for us," said Riley at the end of the meet on Saturday night.

"The only thing that surprises me is that it actually came down to the last race. Our projection had us winning even before the last race. We had some mishaps yesterday (but) I guess this is even sweeter, winning it with last race is even sweeter. It was a great all-round effort and it proves again that the strategy we employed this year is a plausible strategy."

Regarding the 4x400m relay that decided the championships, Riley said: "We knew we had a better team than Calabar; we have never lost to them all season. We have ran some very impressive times in the 4x400m. We have lost only once, we have ran about four 4x400m races using four different teams just to kind of feel out what we would do at Champs," Riley noted.

Despite the fact that the somewhat top-heavy Wolmer's team will lose a great deal of their impressive Class One contingent, Riley insists that the foundation is strong enough for the establishment of a dynasty and is already targeting a positive title defence next year.

"We will be able to repeat this feat. We will be losing some of the athletes and yes we are heavy in Class One and many of them will be going away. We are building from the base, we have a very strong Class Three team and we will just continue to build from the base and do what we have been doing for the past four years," said Riley.