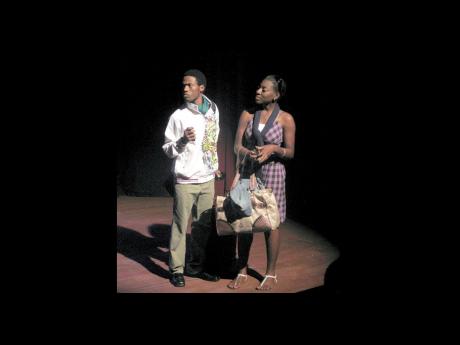 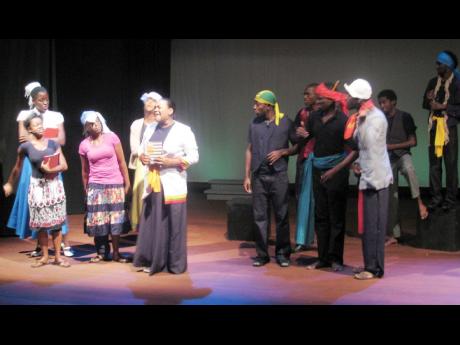 The Christians on the left and the rumheads on the right in 'Glass Routes'. - photos by Mel Cooke 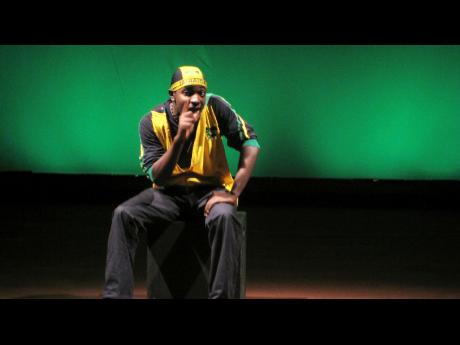 Glass Routes, this year's major production of the University Dramatic Arts Society (UDAS), completed its six-day run on Sunday, March 14, but in Jamaican music parlance it was deserving of a 'forward'. And a musical it is, written, directed and produced by Michael Holgate and produced by Kenrick-Alexander Sharpe.

So Glass Routes was staged once more at the Philip Sherlock Centre for the Creative Arts, University of the West Indies (UWI), Mona campus, last Thursday to an appreciable and very appreciative audience.

The production is deserving of superlatives on different levels, primary among them how it negotiates the cliches and predictability inherent in its format and plot. It is billed as 'A Jamaican Musical', so naturally people are going to sing Jamaican songs. Nothing stunning about that, on the surface of it. Then the first time we see Jonathan (Brian Johnson) and Shelly (Julene Robinson), the storyline of the production is immediately clear. As required by Jonathan's father's will, he of classic acquired British stiff upper lip has to return to the Jamaican village he came from. He is unhappy (to put it mildly) and we know that for one there will be a fractious reunion and also that it will all be resolved in the end (hey, it's a musical). Again, nothing stunning about that.

But the choice of music and the skilful interweaving with the spoken part of the dialogue (for the songs are very much part of and not incidental to the script) is marvellous, the UWI Pop Society, accompanied by Stephen Maxwell, providing the music for the actors and actresses to sing. From the opening Wonderful World (Dr Jimmy Cliff is favoured heavily in Glass Routes) through to Rodney (Stephen-Rae Johnson) utilising Assassin's Eediat Ting Dat to chastise Jonathan over his treatment of his mother and a peppery Akema (Petrina Williams) instructing Chat To Me Back à la Lady Saw, there is tons of Jamaican appropriate popular music. Add to that, though, the infectious 'clap hand' songs of praise, plus a touch of poetry.

Then there is the delivery of the songs. Clearly, the UDAS players are not professional singers, but they are certainly well above average in the main and the emotional high point of the production, where Jonathan sings Sitting in Limbo comes across excellently.

The movement, black-clad dancers a near continuous part of the stage landscape, as well as the movement of the various choruses, the one composed of joyous rumheads led by Randy McLaren, who plays a strong role as narrator and also Jonathan's father Joseph, having the major stage time. At one point, they clash with the Christian chorus of young women, answering their upbraiding with One Day Christian.

It is one of many humorous moments in Glass Routes, several of them supplied by Duran Duckett in the all-male chorus one. Then there is Jonathan's struggle with language, to maintain his British reserve and frosty tones in a place where he spoke a much more natural tongue, that itself part of the tussle with "who am I?"

However, Glass Routes is not about belly laughs. As Joseph (in his chorus role) asks in the beginning "who am I? Who are you?" Jonathan has to find out that himself as the story moves from the past to the present in the same scene, the initial meeting between his parents played out as an older woman remembers the encounter at Joseph's Nine Night. Then there is Elizabeth walking from the kitchen to centre stage, back in time to her parting with Joseph as he goes off to England.

Jonathan must face the past and his rage at growing up without his mother, the truth revealed in letters that were saved. And he must also face his father in the spirit world and face the man he trusted implicitly with his fallibility, as the present other world and the seen reality coincide onstage in a flurry of music and movement.

Still, after Cliff's I Can See Clearly Now, the closing song; Now That We've Found Love is a tad cheesy. But hey, but at least it's not One Love.