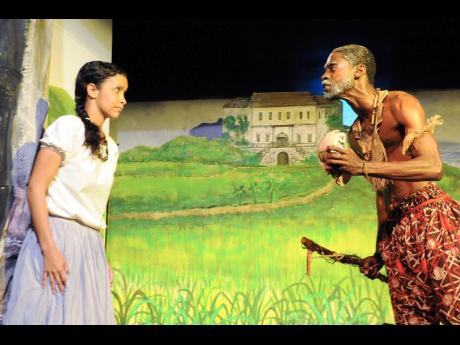 YOU MAY have read or heard the story of Annie Palmer - the White Witch of Rose Hall - but until you see Douglas Prout's remake of the cultural drama, your thirst for more will remain unquenched.

The White Witch, as made by Prout, comes to Kingston this weekend. The staging, which is being facilitated by the Press Association of Jamaica (PAJ), will take place this Sunday, April 4, at the Theatre Place at 5 Haining Road, New Kingston.

Prout says it represents "a novel approach to revisiting the well known story of Annie Palmer."

Palmer is recalled by Jamaican folklore as the white witch who owned the Rose Hall Plantation. She allegedly made a habit of luring male slaves into her bed at night, often murdering them. The white witch is said to have disposed of those lovers because she was bored with them.

Maylynne Walton, who stars in the television show, The Blackburns, is the lead actress playing the role of the wicked witch.

"It is a one-of-a-kind product in that it has fresh, brand new, infectious music guaranteed to please lovers of all genres and it is a highly entertaining family show," Prout said.

Having already played to full houses in St James, White Witch has promised much and the PAJ says it plans to use it as a benefit to earn money for its welfare fund.

PAJ vice-president, Daraine Luton, who has responsibility for welfare matters, told The Gleaner that not only was the organisation interested in aggressively growing its welfare fund but that it believed White Witch provided the opportunity for "healthy family entertainment".

An aggressive growth in the welfare fund of the PAJ is a critical plank in the administration's vision to provide assistance to journalists in need.

"We believe passionately that professional organisations not only have a responsibility to ensure that practitioners deliver the highest ethical standards but also that members are fully supported in times of need," Luton said.

He noted that the association had been called on to assist media practitioners in various areas of need. He said that while the association had provided assistance to such members, it would be in a better position to provide support if its Welfare Fund was properly capitalised.