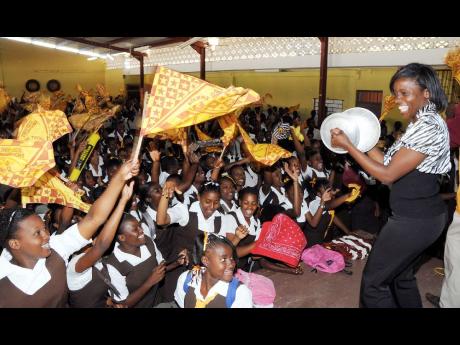 Sedricka Lewis (right), teacher at Holmwood Technical, leads the celebrations with a pair of pot covers as the staff and students celebrate their eighth lien on the ISSA/GraceKennedy Girls' Championships inside the school's auditorium in Manchester yesterday. - Norman Grindley/Chief Photographer 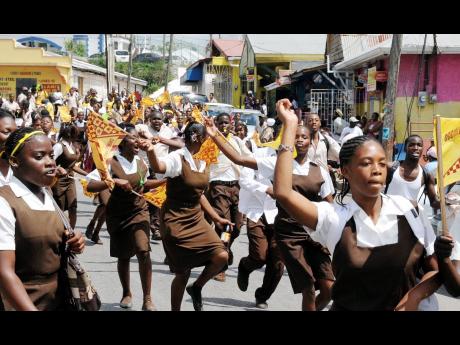 Students of Holmwood Technical High School march through the streets of Christiana, Manchester, yesterday as they celebrate their victory in the 2010 Girls' Athletics Championships. - Norman Grindley/Chief Photographer
1
2

THEY GATHERED in the town of Christiana, Man-chester, as early as mid-morning, hoping to get a glimpse of their Holmwood stars, hoping to join in the revelry of yet another ISSA/GraceKennedy Boys and Girls' Championships triumph.

After building a Girls' Champs empire with eight victories on the trot, one would almost expect Holmwood's latest success to go by with little or no attention, lost as 'just another trophy'.

However, this was not the case yesterday as the celebratory convoy rolled into the bustling town close to noon. Champs still means a lot to this community.

They could be heard long before they could be seen. The sound of cheers, horns, whistles and drums flooded the streets of Christiana and soon hundreds of students, teachers, parents and well-wishers, draped in maroon armour, brought traffic to a standstill as they partied like they were winning their first title.

Everyone joined in the festivities, from the youngest to the oldest; this means everything to everyone.

The excitement actually started long before with a rally session inside the school's auditorium with visual arts teacher Everard Harriott doubling as MC. The building seemed to burst at the seams with every square inch covered by exuberant students. Pot covers met with deafening effect, a giant Holmwood flag made its rounds throughout the masses, the school band was in full voice as the celebrations took the form of a revival gathering.

Their motto, 'Deeds, not words', emblazoned across their chest on T-shirts in what was probably another not-too-subtle message to their rivals.

The roof was almost removed from the auditorium when team chef Laurel Green brought out the trophy for all to see, as hundreds of screaming students erupted wildly, perfectly in sync with another round of revival-type singing. This is a proud bunch and school spirit is certainly not in short supply here.

"Might as well wi keep di trophy. A fi wi and dem cyaa get it," Harriott exclaimed.

Team captain Petra Fanty was very much part of the mix, and the 18-year-old, who has been on six championship teams, was extremely happy with the victory and was pleased with the appreciation shown by her peers.

"This means a lot to us. Now we are thinking about the ninth (title). I'm enjoying the celebrations and I feel good that we were able to come out on top and make everyone happy," said Fanty.

Her teammate and triple gold medallist Chris-Ann Gordon was equally excited about the activities.

"We are glad for this victory. We trained hard and this means a lot to us," Gordon shared.

In the meantime, principal Paul Bailey was also elated with the latest victory, describing it as his most precious, considering the problems the team had to endure leading up to the meet. He also credited their success for the general academic improvement that is being enjoyed at the school.

"This one was more special because most people expected Edwin Allen to win this one and it was extremely close but the girls dug deep and we feel very good about this one," said Bailey. "This is another major achievement; this is now the eighth time that the girls are winning the Championships and I keep on saying that the fact that they are doing well in sports helps them to do better in academics as well."