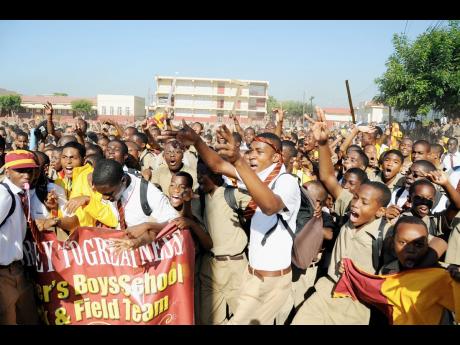 During the first day of school since the meet, students of Corporate Area Wolmer's Boys celebrate the school's victory last Saturday in the 2010 Boys and Girls' Athletics Championships. - Ricardo Makyn/Staff Photographer

THE TEARS flowed freely, but there was no sad face inside the Heroes Circle home of Wolmer's Boys' School yesterday morning as Wolmerians celebrated in a way they had not done for 54 years.

Then there were the 'young old boys' applauding a victory they never saw during their school days, students from the neighbouring Wolmer's Girls' School, parents and teachers. They all danced up a storm to some off-key drumming by the school boys.

"This win means a lot to me because, from I come to Wolmer's, we never win anything else apart from Colts football," shouted Edson Hunt, a fourth-form Wolmerian.

"I'm very excited and proud of the Wolmer's boys and even though we are two different schools, we are still one blood as we were founded by the same person," Krista Gaye Brown, a sixth-form student at Wolmer's Girls' High School, said as the drummers banged with vengeance.

It was the first school day after members of the Wolmer's track team displayed determination, grit and class to lift the Mortimer Geddes trophy, the symbol of athletics superiority for Jamaica's schoolboys.

With the big shiny trophy on display, even the school's principal, Dr Walton Small, was compelled to join the party.

"For the entire Wolmer's family, it is something that is unbelievable. I'm getting calls from as far as Australia non-stop," Small told The Gleaner with his voice going.

"One gentleman from Florida called and said he was crying, he could not control his emotions. When I was at the National Stadium on Saturday, I saw the old boys crying, even a parent and a child were in front of me crying," Small added.

He noted that Wolmerians have not had the sweet taste of victory for a long time and the win last Saturday was definitely a reason to party.

"But as soon as the celebration finishes at 9:25, it will be back to business because we are a school that emphasises the mixture between sports and academic performance," Small said.

No talk about books

But there was no talk about the books as the Wolmerians celebrated and many old boys were late for work yesterday as they got caught up in the maroon-and-gold fever.

"It was breathtaking but the team carried it off and I had to be here for the celebration this morning," said Justice Ministry Information Officer Rohan Powell, who graduated from Wolmer's in 1983.

"For all Wolmerians, this is a dream come true," declared Milton Samuda, who heads the Jamaica Chamber of Commerce.

"This is going to heighten the morale and the strive for excellence. I think this is going to fuel the fire of excellence and we are going to see a new breed of Wolmerians emerging," said the Reverend Dr Orville Neil, the school's guidance counsellor.

That new breed of Wolmerians will hope that it will be much less than 54 years before the school is again crowned champion.