The art of Carolyn Cooper 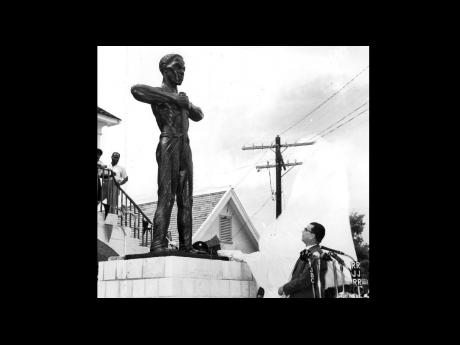 1965: The statue of Paul Bogle, erected in front of the Morant Bay Courthouse.

There was a very funny incident in Schools Challenge Quiz a couple of weeks ago when the question was asked: "Dr Carolyn Cooper is a professor of what subject?" The reply came back: "Earthquake awareness." It was a moment of unintentional hilarity enjoyed by many. Be that as it may, Professor Cooper certainly appears to favour an 'earthquake-like' iconoclastic approach to public art, and would no doubt have cheered on the Taliban in their dynamiting of the sixth-century Buddahs of Bamyan in Afghanistan in 2001.

Or perhaps she would have reserved her artistic patronage for the guerrillas, who in 1995 blew up the distinguished Colombian artist Fernando Botero's sculpture of a peace dove 'The Bird' as "a symbol of oppression". There has always been and will always be controversy surrounding public art, particularly public sculpture. When the architect Sir Basil Spence commissioned Sir Jacob Epstein as the chief sculptor for the rebuilding of Coventry Cathedral in Britain in the 1950s, he faced great opposition because "Epstein was a Jew". Spence wisely pointed out, "So was Jesus Christ."

Nonetheless, Epstein's monumental depiction of 'St Michael and the Devil' was declared "monstrous" by the establishment. There, too, it was the devil's huge penis that upset most folk. It actually makes the one in Emancipation Park look positively puny.

We all have our personal tastes in art. Things that we like and dislike. But to cast the National Gallery of Jamaica as the "graveyard for public art rejected by the public" dishonours the work of Kapo, Albert Huie, Everald Brown and the like, who clearly understood the nature of artistic symbolism. The general drift of Cooper's argument leads us inexorably towards the realist depictions of totalitarian regimes like German fascism and Russian communism, or even more ironically, of the colonial past.

Our own current popular regime seems to be of a very un-Jamaican literalness (a style highly favoured by imported evangelical churches), which will continue to support the production of 'figurines' rather than the depiction of more complex metaphors in our public art.