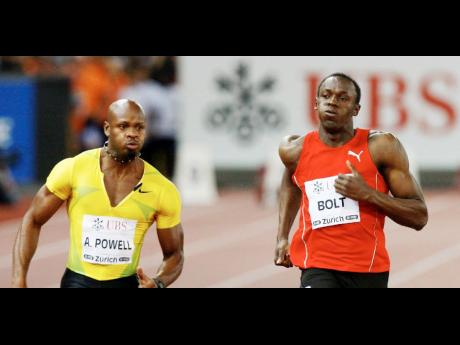 Asafa Powell will get the desire of his heart on July 16 when he lines up with fellow Jamaican Usain Bolt for the 100 metres dash at the ninth Diamond League meet at the Stade de France.

Powell recently told the BBC that he still believes that he can beat Bolt over the distance and also set a new world record.

A bronze medallist at last year's World Championships in Berlin, Powell is the last man on Earth to beat Bolt over 100 - two years ago in Stockholm, Sweden.

Race organiser Laurent Boquillet said that Powell will get his chance to face Bolt in the French capital.

Bolt's coach Glen Mills had indicated that the sprint megastar would contest seven of the 14 Diamond League meets this year and Boquillet is happy that Paris is one of them.

"Bolt's potential remains an enigma; nobody knows what he's capable of," said Boquillet on the website of the sport's world governing body, the International Association of Athletics Federations.

"He is in a class of his own, but his presence should electrify the rest of the race. We may see other athletes benefit from the high pace to score some very big times."

Last July, Bolt withstood a chilly, rainy night to clock an impressive 9.79 seconds during his first-ever performance in the Stade de France.

Media reports indicate that Bolt will also run the 100 on June 12 at the New York leg of the inaugural Diamond League.

These dates in New York and Park for Bolt would be of keen interest to the BBC and Sky. The two British broadcasting giants were in a bidding war to secure British broadcast rights for the Diamond League, particularly the events featuring Bolt.