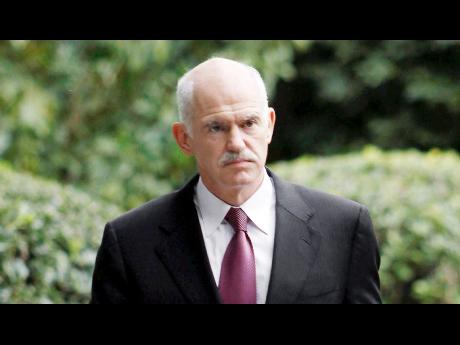 Markets drove up Greece's borrowing costs again Tuesday despite last week's promise of a financial backstop from other eurozone countries, indicating the country's debt crisis is far from over.

Greece tapped another €390 million from bond markets on Tuesday by reopening - or selling more of - an existing, 20-year bond. But its success in raising money from bond sales was darkened by the continuing high interest rates markets are demanding to hold Greek debt.

The interest rate gap, or spread, between Greek 10-year bonds and equivalent German issues - considered a benchmark of solidity - rose back to above 3.35 percentage points on Tuesday, about the same as before the rescue plan's announcement last Thursday and up from the 3.06 percentage points on Monday.

A wider spread means weaker confidence in a country's debt as investors demand a higher risk premium to hold it.

That means Greece is paying roughly twice in interest what Germany must to borrow, despite the promised backstop from eurozone governments.

Athens hopes the rescue plan - in which the 16 eurozone countries promised loans together with funding from the International Monetary Fund to assist Greece if it is unable to borrow or pay its debts - will help restore market confidence and bring down the spreads.

But no money is being made available to Greece right now and any loans would require the approval of all the other eurozone members.

Finance Minister George Papaconstantinou has said he expects the spreads will narrow gradually.

"I think it would be a big mistake to believe that a few days after the decisions at the summit and by the European Central Bank that the bond spread would collapse. That's not what we expected," he said late Monday.

"We know that the spreads will have a gradual tightening, and more or less tighten the most after Greece passes the difficult stage of April and May."

If borrowing costs remain high, the savings from painful austerity measures that Greece announced a few weeks ago could be squandered on paying off high interest rates on debt.

Crisis far from over

Monday's successful bond issue "is another step forward for Greece, but the crisis is far from over," said Ben May, European Economist at Capital Economics Ltd.

"The government is still paying a high price to borrow from the market," he said, adding that "with the crisis far from over we expect the euro to continue to weaken."

Greece on Tuesday sold €390 million though the reopening of a 5.9 per cent bond that comes due on October 22, 2022, the Public Debt Management Agency said Tuesday.

The agency had said it had been seeking to raise up to €1 billion with Tuesday's sale.

The sale came a day after Greece raised €5 billion with a seven-year bond issue, in a crucial first borrowing test after the euro zone unveiled a rescue last week to help Athens cope with its acute debt crisis.

Monday's bonds were sold with a coupon of 5.9 per cent. The high yield comes before April and May deadlines to refinance about €20 billion in debt, with total borrowing needs at €54 billion (US$72 billion) this year.