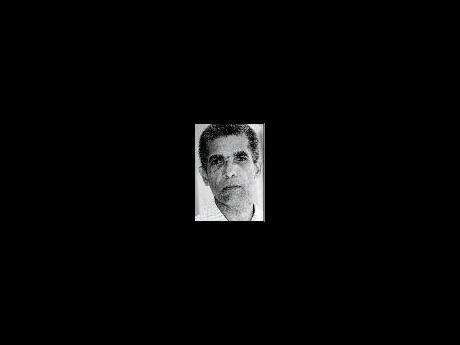 IN EARLY February 2010, a woman with most of the markers of being a part of the social ballast of the society, that is, middle-aged, middle-class, meaning loosely, neither rich nor poor, and possibly charged with the wonderfully uplifting but challenging responsibility of mothering teenagers, was robbed of her cellphone while waiting in her car at a traffic light in uptown Kingston.

Seemingly without much forethought, she pursued the thief and ran him over with her vehicle. She then walked over to the dead body and recovered her cellphone. This, I am told, is how the matter was reported in a televised newscast. I do not know if all the facts and the details regarding her inferred intentions are true, but I think that the basic observations may be taken as approximating the truth. And even if they are not true, the telling thing about this country is that they could be true.

The important bit of information necessary for an understanding of this extreme reaction by the woman is not that her cellphone was taken, but rather, that she was slapped in the face by the thief. This is the 'choke-and-grab' technique which is used to distract and disorient the victim long enough to give the thief time to escape. I, therefore, suspect that the homicidal response was not primarily because of the theft, but rather the presumed 'disrespect' that was read into the slap. The incident reveals a hypersensitivity to perceived insults and a predisposition to resort to self-help 'justice' that is now fairly prevalent in the society. This is the tale of one woman, and an alleged murder.

Threats of violence from women

A few days earlier, Mark Wignall, in his newspaper column of February 5, described an encounter with another woman who was occasioned by the threat of violence. He described her as a young, unemployed construction worker who had done well enough to own and drive a good car, and who projected a highly sexualised femininity. She, however, appeared to be very familiar with the world of violence and knew how to be credibly menacing. According to Mr Wignall, in response to one of those familiar road-code violating manoeuvres by a taxi operator, she impulsively threatened the operator with violence. And, after the taxi operator had taken evasive action, she added, "Him nuh know seh man kill man fi nutten now." This is the second woman, and perhaps a murder avoided.

There is a third tale worth telling. It is the story of an upwardly mobile middle-aged, middle-class woman who thought that she was being overcharged by a taxi operator. Her direct response on hearing the fare was, "How yuh suh tief! Yuh nuh know seh mi wi kill yuh?" As she related the story to me, the taxi operator became apologetic and gave a full and satisfactory explanation of how he had arrived at the fare.

As was the case with the other women, her use of the language of violence had been spontaneous. It was as if the language of violence had already been completely absorbed from the environment and etched in her consciousness. The exorbitant fare, like the theft of the cellphone and the near motor-vehicle accident, appeared to have triggered an emotional response that cued into a now deeply held way of thinking about the use of self-help violence. Indeed, in this last case no harm was intended and this lady does not look particularly menacing.

Threat of violence is powerful

In this country, the threat of violence is a very powerful thing. Even if there is no capacity to deliver on the threat, chances are people are now likely to take you seriously. Unlike the cellphone robber, the taxi drivers, who are not usually timid souls, did not take any chances. They adopted a defensive posture and, thereby, avoided any escalation of the confrontations.

As human beings, we must constantly try to make sense of daily events in our country - especially when they seem to form patterns. We make tens, perhaps hundreds, of decisions every day and many of these are informed by our understanding of our environment. If we are to live effective lives, we must constantly update our understanding of the social environment. If we are to be good citizen-advocates for effective crime control policy, it is our first responsibility to understand what is taking place.

What then must we make of these three women, two threats and an allegation of murder? Are they so atypical that they signify nothing and thus are unworthy of our attention? Alternatively, are they repre-sentative in some ways and their behaviour meaningful and therefore worthy of examination? The importance of the stories of these three women is in what they signify. They tell of the change that has occurred in the attitude and behaviour of sections of the population, which, at an earlier time, were somewhat removed from the violence in the country. They are tales of not very unusual encounters that the typical Jamaican may be exposed to, and how these encounters could become unexpectedly deadly. As events, they are signs. Much like a road sign, they point to a possible future that could turn out to be a consolidation of these elements of the present - but only if we permit this consolidation.

We are now quite familiar with what were unusual violent criminal behaviour, such as beheadings, the killing of children and the aged, and the elimination of substitute victims, including entire families. This kind of behaviour seems feral. However, it would be a mistake to think that this problem is simply a matter of undersocialisation and a weakening of institutions, such as the family. On the contrary, it has to do with a kind of oversocialisation that is revealed in a shift in attitudes to violence in the society. Thus, a violent reaction to perceived disrespect suggests that personal respect is a deeply held value that is perhaps placed above respect for life.

I have tried to measure these changes in attitude to see the extent to which they constitute something new that we may call a subculture of violence and the extent to which the attitude set that is associated with this subculture has permeated the society. A hypersensitivity to insults such that 'dissing' leads to a violent response (H), the orientation to revenge (R), attitudes to gun and weapons possession (G) and readiness to use violence (RV) are some of the accepted indicators of this subculture. The common thread that runs through this attitude set is an affirmation of self-help violence or self-help 'justice'. (See table). By a subculture of violence, we roughly mean that sections of the population have a positive orientation to self-help violence.

The general findings of this survey suggest that there is a large minority support for the use of self-help violence. Some 20 per cent think that it is alright to respond to disrespectful treatment with violence. There is a particularly strong revenge orientation. More than one half of the population is supportive of revenge-taking. This level of social support provides very favourable conditions for particular kinds of violence. It is not exactly a law-abiding orientation. These facts suggest that it will be difficult to find a jury that will convict someone for murdering a killer, and it may even be difficult to find one that will convict someone who kills a cellphone robber.

Violence is highly concentrated. A similar pattern of geographic concentration of favourable attitude to violence would therefore not be surprising. However, the data suggest otherwise. The evidence from my work, which is already some two years old, suggests that these attitudes have spread well beyond the high-violence areas into the larger population and sections of it that do not exhibit high rates of criminal violence, such as women. This may be taken as a glimpse at a possible future, that is, a society in which there is even greater social support for the use of self-help violence.

Gender is an ideological mine field. As a man, I enter this minefield with great caution and hope that I do not offend. I am not particularly concerned if the facts offend. I am not that timid. My concern is with an unfair or biased interpretation of them. Let me, therefore, stress that I have highlighted the gender difference in attitudes simply to show the spread of the problem throughout the population, to groups that have not been deeply involved behaviourally, and are expected to resist the turn to violence. This is why the above data is so revealing of the changes that are occurring in our society and why they may signify further change. A consistent attitude set may forecast behaviour.

Jamaican females have long been both perpetrators and victims of some forms of socially approved violence, such as child beating, child abuse and spousal violence. But their level of involvement in, and extent of support for other forms of victimising violence have been much lower than that of males. The data suggest that the male-female gap may be narrowing, and that females may no longer be an effective force blocking the turn to these forms of violence.

The good news that was revealed by this research is that education matters. There was a considerable difference between the attitudes of persons with tertiary education and those who terminated their education at a lower level. There was much less support for self-help violence among the tertiary educated, which as a group, is diverse in its social origins. The evidence suggests that tertiary education is a kind of threshold. Secondary education has no such effect. There were no significant differences between the attitudes of illiterate persons and those of the secondary educated. This level of education has no measurable impact on attitudes to violence. This finding is consistent with the findings of a rigorous study conducted some time ago by a group of us at the University of the West Indies (UWI), which suggested that poor quality secondary education may actually be compounding our crime problem.

This finding should not completely surprise us, as the secondary system has been so overloaded that it is apparently unable to add the value that is required to deliver the level of achievement that is expected. Neither is it able to transform the attitudes of its students. We should take this as a warning and examine very carefully what we are now doing with tertiary education. I cannot but note the recurring campaigns against the UWI, which, just by chance, tend to occur when it is time to prepare the new budget. I urge the authors of these campaigns to examine carefully what they are doing. We would like the results of a similar survey done in 10 years time to show that tertiary education still matters, and that while producing more doctors and engineers, it also contributes to the development of less vengeful, more peaceful and law-abiding citizens.

When we are offended, we may not respond violently, but too often we think violence. The thoughts of violence are revealed in our language, including the language used in non-confrontational encounters with each other. This is the Jamaica in which we now live. We have drifted very far into the deep, and all that we have with which to take us back to shore is a canoe and two oars. Successfully making it back begins with knowing where we are and the resources on which we have to reply.