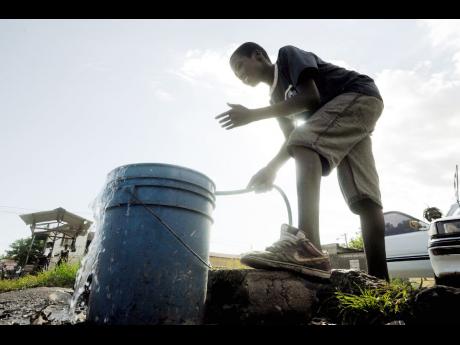 Jamaicans are being urged to brace for more water lock-offs as the long-running drought worsens.

In fact, the National Water Commission (NWC) is warning that it cannot guarantee even the limited supply of the precious commodity which some Corporate Area customers now get for a couple of hours each day.

"Because of dwindling supplies, and despite the scheduled water restrictions imposed, some areas have not and will not be able to receive piped water supply," the NWC said yesterday.

"As a result of the worsening water situation, some customers who were previously receiving scheduled piped service will experience a worsening of their water supply experience," added the NWC.

According to the commission, it can only provide the water that it collects and some customers will experience severe shortages in some areas, regardless of the distribution regime that is put in place.

The NWC said the continued absence of rain is causing the inflows into the most critical water supply systems to dwindle even further as the country struggles with the worst drought to affect the Corporate Area in more than 20 years.

"The cumulative effect of very limited rainfall in most southern parishes over several months has resulted in as much as a 90 per cent decline in inflows from some rivers and springs," said the commission.

The problems facing Corporate Area residents is being compounded by the failure of the NWC to restore a number of wells as scheduled.

According to the NWC, its attempts at drilling or rehabilitating additional wells as part of the drought mitigation programme have been met with mixed results.

"Whereas the Beverly Hills Well, Well H, Government Park Well and other wells being developed or rehabilitated ... are being introduced into the system, some other previously considered wells have proved to be either contaminated or are much more challenging to bring back into operation than was previously hoped.

"The drilling and development of the Hampstead Well and Tank in the Mountain View Avenue area is still under way, despite being temporarily disrupted by the recent outburst of violence in the area. Within the next two weeks the NWC expects that other wells being developed will be put into operation," the commission said.

It is also to be noted that, with its water supply systems being operated under drought conditions they are prone to more frequent leaks, air pockets and other blockages, water discoloration, electrical, mechanical and other problems.

The NWC pointed to other countries in the region experiencing similar problems, as it urged its customers to exercise patience.