Farmers under the weather 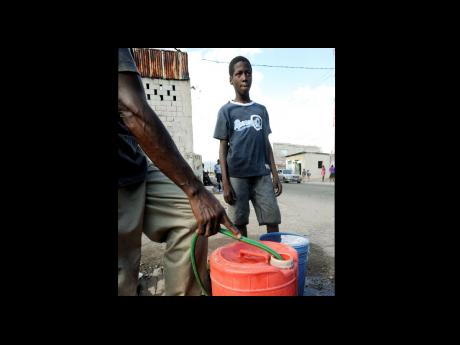 Residents catch water from a makeshift standpipe near the intersection of Maxfield Avenue and Spanish Town Road in St Andrew yesterday. Many residents in this area have to get water from the standpipe because of the severe drought affecting the island. - Ricardo Makyn/Staff Photographer

The ongoing drought conditions affecting the island are having a debilitating effect on farming in western Jamaica.

President of the Jamaica Agricultural Society (JAS), Glendon Harris, believes it is twice as expensive for farmers to produce, as well as for consumers to purchase goods.

Harris said sections of St James had seen slight rainfall between Monday and Tuesday, but emphasised that the ground had been severely dry for quite a while, which makes ploughing almost impossible.

"Crops are wilting. Farmers who want plant vegetables cannot do so unless their farm is located in proximity to swampy areas, or at least be able to purchase water," Harris stated.

He said the situation in St Elizabeth was really bad, but that farmers were coping somewhat, as they had put certain measures in place.

Harris believes the drought is as a result of low water tables, significantly reduced rainfall and deforestation.

"I believe the water table has fallen so low there is no moisture content in the hills."

The JAS president added that although there was no definitive findings for the cause of the drought, he, like any other farmer, would hate to know that human error, such as deforestation, was a major factor.

"We are encouraging the Government to embark on an islandwide reforestation project to mitigate severe drought conditions in the future." He believes normal rainfall should resume by April and there should be an overall reduction in prices.

Meanwhile, president of the St Elizabeth JAS branch, Roy Morrison, said the Breadbasket Parish had not seen significant rainfall for the past year.

"The rainfall between April and May last year was not as good as previous years, so that has created some challenges for farmers. Now that we are in a real dry period, it makes the situation even more severe," Morrison said.

He said, however, that farmers were usually resilient and have been marshalling the limited resources, such as purchasing water from wells and storing the commodity in tanks.

Owen Heaven, a farmer of Golden Grove in Hanover, said his crops of yam, cane, dasheen and badoo are flourishing.

"The drought is not really affecting us, as we have a large storage tank and the area is cool. We do not have any water problem," he said.