Marriage should not bar men from priesthood 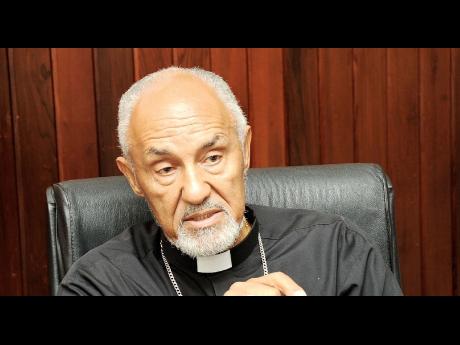 Archbishop of Kingston, the Most Rev Donald Reece, insists that conclusions that celibacy is the trigger to paedophilia are simplistic and facile. - Ian Allen/Photographer

The head of Jamaica's Roman Catholics has called for a rethink of canon law which prohibits married men within the denomination from being admitted to the priesthood, a departure from the Vatican, which holds that family commitments compromise religious calling.

The Most Reverend Donald Reece, who took over as Archbishop of Kingston in 2008, said optional celibacy for priests should be put back on the table for discussion.

The movement for the restoration of the right of married men to become priests - a privilege they enjoyed hundreds of years ago - has been gathering steam in recent years. The celibacy tradition is rooted in the apostle Paul's decision not to marry, as companionship is perceived as a distraction from the principal mission of the clergy - spreading the gospel. Ironically, Jesus' disciple Simon Peter, the first pope, was married.

"That's the ancient view. I like that view myself," Reece said, referring to clerical marriage.

Men who are already married are permitted to become priests in the Eastern Orthodox Church, and the same applies for Anglican priests who cross over into Western Catholicism.

Celibacy not to blame

The controversy over ecclesiastic celibacy has intensified over the last decade because of an explosion of sexual-abuse revelations involving Catholic priests. The fact that boys were the majority of abuse victims has sparked questions of whether sexual repression had driven them into gay and paedophile lifestyles.

But Reece, who has been a priest for 40 years, rejected claims that there was an umbilical link between the vow of celibacy and paedophilia.

"I totally debunk that. It's not (because of) celibacy. It (paedophilia) is a human thing, not a religious thing.

"You'd be saying all celibates are dirty old men. That's too facile, too simplistic," he said.

The Reverend Peter Garth, vice-president of the Jamaica Association of Evangelicals - an umbrella grouping of 23 charismatic churches and para-church organisations - also believes the Catholic Church should review its strictures on celibacy, largely because he considers it an unattainable state for most clerics.

"Celibacy is not the norm, it is the exception. For one to live a celibate life, it takes a lot of discipline.

"History is on my side. Many have gone in who are not called to a life of celibacy. To go there could pose some serious problems," added Garth, who heads the Associated Gospel Assemblies denomination.

The latest wave of sex-abuse cases implicating clergy and other officials at Catholic schools has turned the spotlight on the Vatican, and Pope Benedict XVI specifically, as there are indications the Holy Father may - in previous roles as cardinal, and archbishop of Munich - not have penalised culpable priests.

But Reece has thrown his support behind the embattled pontiff, arguing that the pope cannot be held accountable for all misconduct among the global Catholic clergy because not every inappropriate act is brought to his attention.

Reece has criticised the cover-up of sex-abuse cases which has tainted the church's image, arguing that paedophilia should have been viewed as a psychological illness, not an issue of spiritual or moral culpability which could be addressed through counselling.

The Reverend Karl Johnson, general secretary of the Jamaica Baptist Union, while stressing he was not castigating the Catholic Church, agrees that the Vatican and its dioceses could have pursued a range of solutions outside mere transfers.

"Because the reasons that impact on an incident can be multifactorial, that's a danger we have to watch, and I'm not saying this to assign blame. It could well be that you think that you're protecting the victim.

"Transfers, in and of themselves, could not be a sufficient enough response. It may require a cocktail of responses, ranging from professional help, psychiatric, psychological, to possible imprisonment and expulsion," Johnson told The Gleaner last Tuesday.

Blown out of proportion

Reece was at pains, during an interview with The Gleaner, to emphasise that only a small fraction of Catholic clergy has been involved in the sexual abuse of children.

"Once you have one scandal, especially in Jamaica, we tend to broadbrush, once it relates to the Church. It is unacceptable, as the pope came out and said recently. It is something that is clearly to be detested.

"But if you look in the confines of the Roman Catholic Church, it is blown out of proportion. ... If you were to work it out as a percentage, it is not as bad," Garth explained.

The Holy See, the central government of the Roman Catholic Church, has said between 1.5 and 5.0 per cent of its clergy have been implicated in paedophilia scandals, statistics it says match such prevalence in Protestant churches.

Meanwhile, the Jamaican archbishop expressed concern about clergy, such as some in the Anglican Communion, who condone homosexual marriage, specifically mentioning the Rev Gene Robinson, an American Episcopal priest, who has made it public that he lives with his male lover.

Reece, 65, was adamant that the Roman Catholic Church was consistent in its denunciation of clergy or laity who practised homosexuality, distinguishing them from those who struggled with same-sex tendencies but did not yield.

"The Church is not against gays per se, because a gay (person) can be celibate. Gay, but not active," said Reece.