Graham finds comfort in the pen 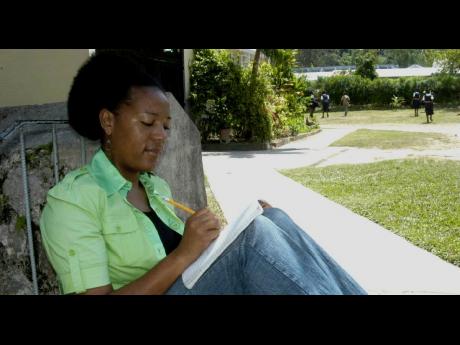 Claudette Graham, whose personal search has ended, encourages fellow students to work on their talents. - JIS

"Who am I? Black and beautiful

Who am I? Smart and sensitive

Who am I? Phenomenal and philosophical

Claudette Graham penned those words in 2007, not knowing that three years later she would have realised her true potential and that unearthing her hidden talents would have transformed her into who she really is - a writer.

Born in the parish of Manchester, Claudette attended the Christiana Moravian Primary School and later Knox College where she became a dropout who seemed not to care, as she was still in search of who she really was and had no set goals in life.

"At one point, I said to myself that if I were to choose a profession, it would have been medicine," she said, her brows raised as if to say, "Oh, well, it was just a thought!"

As much as pursuing a career in the field of medicine was 'just a thought' for Claudette, she emigrated to the United States, where she did a nursing assistant course and landed a job in a health-care facility.

"It still was not satisfying, because I still did not feel like that was me," she said.

Even though Graham had been blessed with her desire in life, such as a husband and children, it was as if something was still missing.

In September 2008, she decided to return to Jamaica, and 'tried her hand' at various things, including farming, but still without satisfaction.

Living in St Ann, she was comfortably at home in Runaway Bay, as her husband had ensured she was properly settled before he returned to the United States.

"As the months passed and as comfortable as I was, there came a time when I found that I was at a standstill and I re-examined everything around me again and again and again, so much so, that I started to write down things," she explained.

"I would sometimes share pieces of my work with friends, who thought it interesting, and would encourage me to take my writing seriously," she recalled.

One particular friend, after scrutinising a few pieces of her writings, encouraged her to do more poetry.

"Becoming a writer, or even a poet, was not something I ever dreamed of, but I heeded to the words of encouragement from my friend and since June 16, 2009, I have not looked back," she says.

Graham has since written over 100 pieces, some in prose.

Today, Claudette G, is a signature that can be seen on many wall plaques on sale at the Ocho Rios Craft Market, as well as in a few other places in the parish.

"I plan to spread my wings far and wide," she said, noting that she is currently working on a book of short stories, as well as putting together a manuscript for her first book of poems.

She also plans to formalise her company, Claudette G and the Talent Store.

The budding author says she would like to work in collaboration with entities such as the Ministry of Education and the Jamaica Cultural Development Commission (JCDC), among others, to preserve 'natural' culture through poetry.

Nothing escapes her at the Brown's Town Community College, where she attends classes in the evenings.

She encourages fellow students to work on their talent.

Claudette says her personal search has ended and she has settled down to writing stories and poems.

"Yes, this is it for me," she acknowledges.

"I write whenever I get the inspiration, whether morning, noon, midnight or even before day break, so it is not like I am recreating someone else's work. Everything I write comes from within me and I stand proud of my achievements today," she boasted.

So far, Claudette G has promoted an end-of-term talent explosion at the Brown's Town Community College, a public event dubbed, 'Poetic Expressions', as well as 'The Spoken Word' and 'Sizzling Sonnets', all of which were well attended.

The writer is currently organising her next major event, scheduled to take place at the Turtle River Park, Ocho Rios, on Saturday. It is called 'Poetry in the Park' and will also mark the launch of Claudette G and the Talent Store, a collection of local poets drawn from all sectors of Jamaican society.

Claudette says she is hoping to make 'Poetry in the Park' an annual event that will give young persons a chance to express themselves.

"It is never too late for anyone to discover the talent that is hidden inside them, and work on it so that it can do good for someone else," she says.