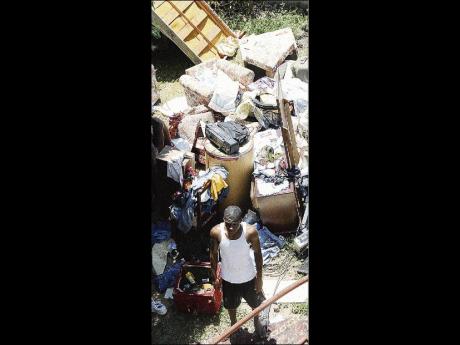 A man stands next to furniture and clothing he secured moments before his house was razed by fire Monday. - photos by Ricardo Makyn/Staff Photographer 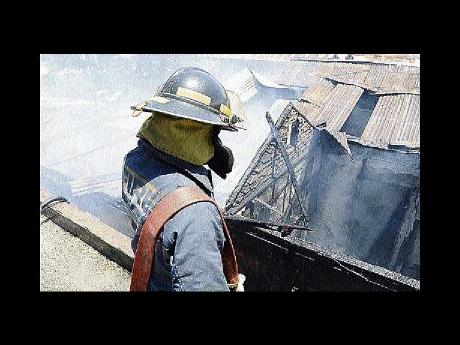 A fireman watches as a house on North Avenue, Kingston Gardens, goes up in flames on Monday. The cause of the fire has not yet been determined.
1
2

Michael Patterson stood against the backdrop of his now charcoal-coloured home, beside a TV stand and just outside his front door as he stared out into the street dumbfounded.

Assistant Superintendent Dennis Lyons of the York Park Fire Station said firefighters received an emergency call at 11:18 a.m. on Monday to put out a fire in Allman Town, Kingston. But it was too late.

Allman Town residents and workers said the fire brigade did not respond to the emergency as quickly as it should have.

"Them never come until all 10-15 minutes after the blaze started," a resident, who wishes to remain unnamed, said.

But Lyons said the fire brigade arrived at the scene three minutes after receiving the call.

He also said he "understands the complaints" but the firefighters at the scene had to send for more water, because of the shortage. There were four units present at the scene - three from York Park and one from Rollington Town.

He told The Gleaner there were five other units occupied with "several fires" Monday in places such as Temple Hall and August Town.

According to Deputy Superintendent Lena McBean of the Kingston Central Police Station, five adults and eight children were inside the house when the fire started.

"Thank God," she said, "everyone came out alive."

However, three persons were hospitalised for smoke inhalation after being rescued by police personnel and residents.

Venessa Phillips also lived in the house that was scorched, escaping with no other garments except the clothes on her back.

She also said persons managed to escape with furniture, but smaller items such as clothes, shoes and other accessories went up in smoke.

"(The fire) started when one apartment at the back catch afire and it spread to the front," she said. "People at the front managed to get their things out."

The fire was contained by noon on Monday.

An investigation into the cause of the fire is ongoing, said Lyons.