Life on a boat 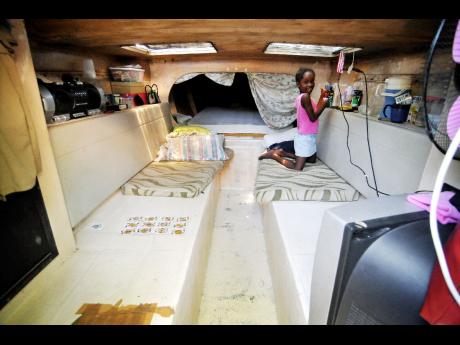 Eight-year-old Gabrielle Fagan is seen inside the tight space of the boat in which she lives with her six other siblings and her mother. - Photos by Kyle Macpherson 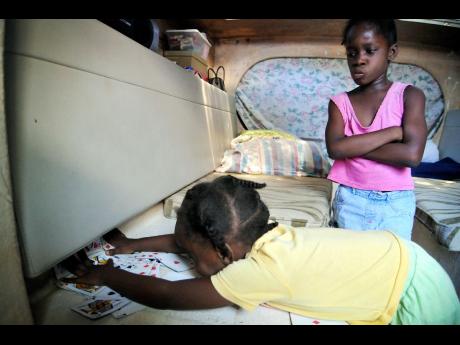 Eight-year-old Gabrielle Fagan looks on in disappointment as her sister Chaderre tackles a neatly stacked deck of playing cards, inside the boat where they live with their five other siblings and their mother in Port Royal. 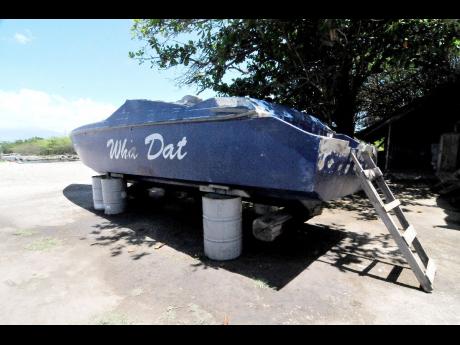 The boat where Althea Marjorie Fagan currently lives with her seven children in Port Royal. 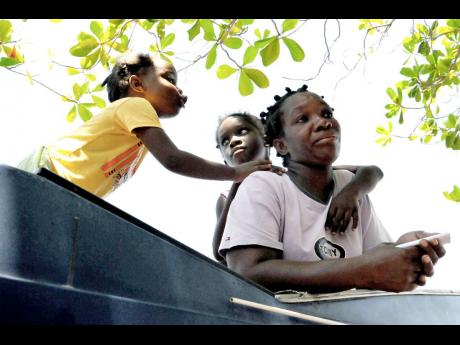 Althea Marjorie Fagan leans over the edge of the boat where she lives with her seven children. Her home struggles began with Hurricane Ivan in 2004. With her in the photo are two of her daughters, Chaderre (left) and Gabrielle. 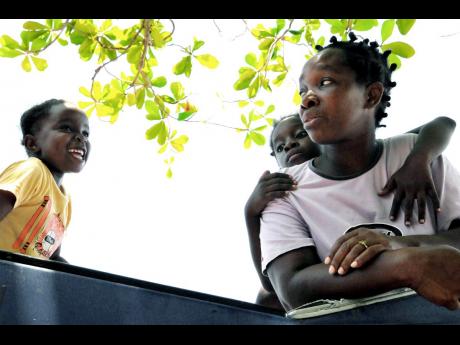 Althea Marjorie Fagan leans over the edge of the boat where she lives with her seven children. Her home struggles began with Hurricane Ivan in 2004. With her in the photo are two of her daughters, Chaderre (left) and Gabrielle.
1
2
3
4
5

Eight-year-old Gabrielle Fagan chased her sister around a boatyard in Port Royal, having been away from school for the past couple of days because her classmates make fun of her living conditions.

Gabrielle and her four-year-old sister, Chaderre took time out for a morning nap yesterday. Sharing their living quarters with four other persons means they are tired because they didn't get enough sleep.

Their mother, Althea, carefully made her way down a small, rickety, wooden ladder. She just climbed out of her tiny home, inside a fishing boat propped on oil drums and huge tyres under a tree.

Althea said children followed Gabrielle home one day and made a big deal about where she lived.

"They point and ask, 'is here suh you live? You live on a big boat.'

Hurricane Ivan put Althea and her seven children on the move. The hurricane damaged their rented home, forcing her to move twice.

October 2009 came around and she found herself setting up camp in someone else's boat. At the same time, she followed up on arrangements she made with Food For the Poor, approximately six years ago, to have a house built if she could find the land.

The Minister of Housing and Water, Horace Chang, wrote her a letter saying he was seeing what could be done about allowing her to build her home on land, managed by his ministry. She already started laying the foundation and after receiving Chang's letter in early March, she held off on building.

Last week added to her distress, when a demolition procedure by the Ministry of Housing and Water took place, wrecking her foundation on Mitchelin Avenue.

She is worried about her children's education, especially her eldest daughter who attends Exelsior High School and is preparing for CSEC.

"I pick up her report card and her grades are dropping," she said. "The teachers don't really understand."

Port Royal residents are worried that eventually all of them will have to move with nowhere to go.

"It is overcrowded here," a resident, who wished to remain unnamed, said. "There are 10 people to one room and it's hard. People say we make (Port Royal) look ugly but we have no other choice."

Althea, who works part-time at Gloria's restaurant, said she was traumatised especially when one of her daughters was attacked and bitten by a dog in the boatyard.

Other struggles include, not having a refrigerator that works properly. It is kept in a corner outside, beside a broken and unused toilet. The Fagans eat mostly tin food and what is roasted on an open fire.

Her home consists of two cot-like areas near the open doorway, and a single bed pushed to the back, under the bow of the boat.

Althea spent yesterday with her daughters Chaderre and Gabrielle, who are always on a mission to make her smile.

"They give me something to laugh about," she said, her eyes glossy and her mouth turned down. Her youngest daughter scurried to her mother's side, tripping over her feet to pat her on the shoulder.

Gabrielle poked and prodded her sister in between hugs. She also got excited at the prospect of staying with her teacher for the Easter holidays.

"Gabrielle told me she wants to go," Althea said. "Her teacher invited her to stay with her.

"I'm close enough with her teacher and she told me Gabrielle draws pictures of me living on a boat."

Althea said she would let her daughter go so "her mind will go free" of the family's burden.