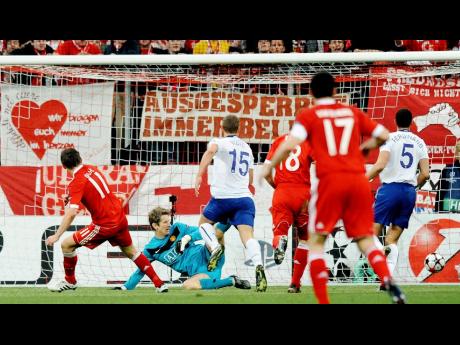 Bayern Munich showed Manchester United what it's like to lose a crucial Champions League match in injury time with a 2-1 victory yesterday, while Lyon beat Bordeaux 3-1 in another quarter-final match.

United, which scored twice in added time to shock Bayern 2-1 in the 1999 final, had not long conceded a 77th-minute equaliser to France winger Franck Ribery when Ivica Olic dispossessed Patrice Evra in the United area and shot low into the bottom corner.

And United's bad night got worse seconds later when star striker Wayne Rooney, who had opened the scoring with his 34th club goal of the season, was helped from the field with an ankle injury that could threaten his involvement in next week's second-leg match at Old Trafford.

United can still advance to the semi-finals for a fourth straight year with as little as a 1-0 win, but veteran midfielder Paul Scholes is the only fit player in United's squad to have scored more than one goal in the club's nine Champions League matches.

Hoping for the best

"He's got a kick in the ankle," United manager Alex Ferguson said of Rooney. "We'll just have to wait and see tomorrow. Hopefully it's not too serious."

But it was not a lack of cutting edge that cost United victory yesterday at Allianz Arena.

"Bayern were the better team; we can't complain about that," Ferguson said. "But we're better than that in possession. We kept giving it away and it causes your own downfall."

Lyon secured victory over Bordeaux through two goals from Lisandro Lopez, a string of saves by goalkeeper Hugo Lloris and defensive blunders from their French rival.

Lopez put Lyon ahead in the 10th minute before Bordeaux striker Marouane Chamakh equalised four minutes later with a header.

Brazilian winger Michel Bastos made it 2-1 from a tight angle in the 32nd and Lopez sealed the victory in the 77th with a penalty, sending goalkeeper Cedric Carrasso the wrong way.

The first-leg matches of the remaining quarter-finals are scheduled for today, when defending champions Barcelona are at Arsenal and Inter Milan host CSKA Moscow.