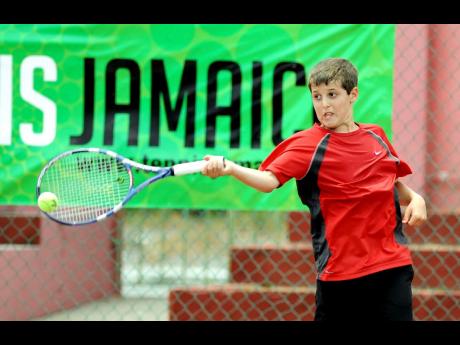 JAMAICA, HOSTS Trinidad and Tobago (T&T) and Bermuda all made winning starts when the World Junior (Under-14) Tennis Championships North/Central American and Caribbean qualifying zone tournament opened on Monday.

Jamaica and Bermuda won their ties by 2-1 margins and T&T swept Panama 3-0. English-speaking Caribbean territories Guyana, Antigua and Barbuda and Grenada tasted defeat, all by 3-0 margins.

For T&T, Scott Lanser continued his good form as he led T&T to a 3-0 sweep of Panama in Group One, which also includes the Dominican Republic.

Lanser, coming off back-to-back singles and doubles titles in the ITF Junior Circuit Tour in Barbados and T&T, eased past Panama's Dylan Centella 7-5, 6-0 for a 2-0 unassailable lead in the best-of-three series.

Lanser and Hackshaw then combined to win the doubles clash over Barnes and Benjamin Bezemar, 6-4, 6-4.

In the other boys' matches, El Salvador blanked Guyana 3-0 in Group Two, the Netherland Antilles downed Antigua & Barbuda 3-0 in Group Six and Aruba crushed Grenada by a similar 3-0 margin in Group Five.

The Under-14 girls segment of the competition served off later in the afternoon with 15 countries involved.

At the end of the tournament, only the champions in each category will advance to the next phase to meet hosts the United States, as well as Canada and Mexico, in Boca Raton, Florida, from April 30 to May 2.

From the tournament in Florida, the top two teams will then qualify for the World Junior Tournament in Prostejov, Czech Republic, in August.