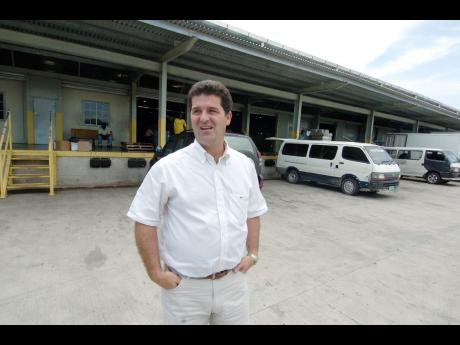 William Mahfood at the Wisynco plant in St Catherine. - File

William Mahfood is ramping up capacity by 30-40 per cent at Wisynco Group's factory in White Marl, St Catherine, requiring an investment of $600 million in a new beverage line on which construction should start next month.

Mahfood wants to grow production to one million cases, up from the current 600,000 to 700,000, a target he hopes to hit by summer when the expansion is to be finalised.

"We need this additional production because we can't keep up with the demand of the products," he told the Financial Gleaner.

Wisynco owns and manufactures Bigga soft drink and Wata bottled water. It also puts out a cranberry mix under the Wata label.

The plant upgrade will install new bottle-making equipment, a filling line for bottles, and packaging, and will handle new products to be introduced by the company, as well as cranberry water, Ocean Spray, and Coca-Cola beverages.

In October 2008, Wisynco inked a licensing deal with Ocean Spray, giving the Jamaican company the rights to manufacture and distribute the Ocean Spray cranberry-flavoured water in the Caribbean and Central America.

Mahfood said in March 2009 that the deal was worth as much as he could sell, and that the market potential was as much as "10 million cases over the next three years".

A $500-million investment in the Wisynco plant preceded that deal.

As for the new capacity: "That will be in operation by summer," he said. "All in all, we should be able to see a 50 per cent growth this year by the time we are finished with that expansion."

Wisynco is one of the largest distribution companies in Jamaica, handling more than 100 brands across its business lines.

The group focuses heavily on beverages, but also distributes foreign food brands to the grocery trade, and holds food franchises for Domino's, Wendy's and Häagen-Dazs.