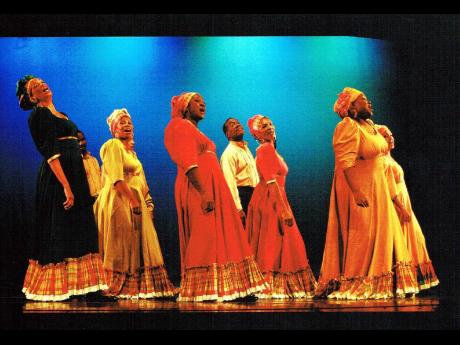 The National Dance Theatre Company (NDTC) will present its annual Morning of Movement and Music at The Little Theatre on Easter Sunday, starting at 6 a.m.

The company of dancers, singers, musicians and creative technicians will present a programme dedicated to its co-founder and late artistic director, Professor Rex Nettleford.

Reputed musicologist and musical director Marjorie Whylie has prepared the NDTC Singers and orchestra to present her compositions of The Lord's Prayer, Alleluia from Nettleford's Litany, and Lord, Look At Me Now, a solo from the Clive Thompson ballet, Journeys Beyond Survival, which will be sung by Howard Cooper.

Also included on the programme is A Mass for Peace by Lani Smith, organist, composer and arranger, best known for his church music compositions.

"This year's performance is unique in that only dance works choreographed by Professor Nettleford are being performed. It is another way for the members of the NDTC to celebrate his life and, simultaneously, Easter - a sacred time which he specially observed," the company's associate director, Barry Moncrieffe, said.

Moncrieffe said the company has been in rehearsals since its sold-out tour to Brooklyn Centre for the Performing Arts in New York during the first week of March.

"With the support of the ballet mistress Kerry-Ann Henry and dance captains Marlon Simms and Arsenio Andrade, we remounted an interesting array of Professor's dances that we know the audience will appreciate and enjoy," he said.

"We have taken one from as far back as 1967 in the form of the Kyrie and Gloria from the popular Misa Criolla, the Catholic mass celebrated in dance with music by the Argentinian composer Ariel Ramirez, who was inspired by popular Hispanic folk forms. It has not been remounted in the last decade or more."

Nettleford, who had been hospitalised after collapsing in a hotel in New York, died on February 2, just hours before he would have celebrated his 77th birthday.