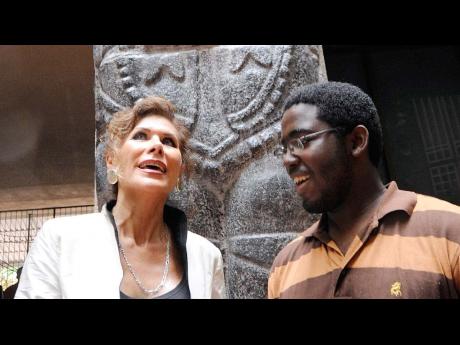 Mexico is scheduled to begin construction of a US$9.6-billion 'Bicenten-nial Refinery' this year.

The project is expected to be completed by 2015 and would be the latest oil refinery set up in that country.

Mexican Ambassador Leonora Rueda said yesterday that the project was developed out of a recognition that the country possesses natural characteristics ideal for the rigorous work of oil refineries.

"This is a great PEMEX (Petroleos Mexicanos) project amid others to modernise the Mexican oil industry, nationalised during this same month of March in 1938," Rueda said.

The Mexican ambassador was speaking at the unveiling of the restored 15-foot tall statue placed in the courtyard of the Petroleum Corporation of Jamaica (PCJ) Building in St Andrew and named El Atlante de Tula.

The PCJ Building, home of the Ministry of Energy and Mining, as well as the Mexican Embassy, received El Atlante de Tula as a gift from the Mexico government to Jamaica during the state visit of former President Miguel de la Madrid to former Prime Minister Edward Seaga in 1987.

After 23 years, the Mexican government took charge of the restoration of the statue, done by Jamaican artist Mark Williams.

"As one of the most recognisable pre-Hispanic Mexican monuments, this statue of El Atlante de Tula is a replica of one of the four original statues, called Los Atlantes de Tula, that were erected by the Toltec civilisation during the ninth to 12th century AD in the city of Tula, in the state of Hidalgo," Rueda said.

Minister of Energy and Mining James Robertson thanked the Mexican government for the gesture and commended the excellent and promising relations between Petrojam and PEMEX in the common goal to develop their energy sectors in an environmentally friendly manner.

Williams, who worked feverishly to complete the task in two weeks, said it was not an easy job to be completed on his own.