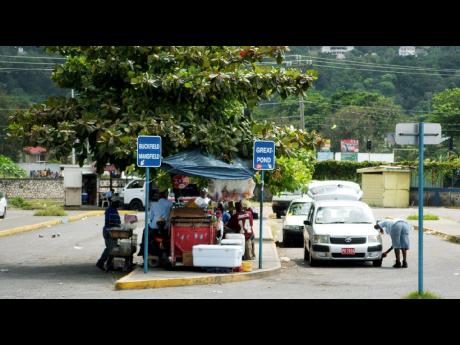 Ocho Rios cab drivers have agreed to use the transport centre while upgrading work is underway. - Photo by Carl Gilchrist

The congestion that has become the norm on the streets of Ocho Rios, St Ann, will soon be a thing of the past if taxi operators hold true to their promise to begin using the resort town's transportation centre as of today.

The presidents of the St Ann's Bay, Great Pond and Milex taxi associations, which account for an aggregate of 600 members, told The Gleaner on Tuesday that their membership will begin using the transportation centre, while upgrading work agreed to with the Transport Authority (TA) and the St Ann Parish Council takes place.

These cabbies culminate their journeys in Ocho Rios and, along with scores of other licensed taxi cabs and unregistered taxis, have been causing mayhem on the streets of Ocho Rios.

Since Monday, there has been a heavy police presence on the streets of Ocho Rios as the lawmen moved to enforce the use of the centre.

Tuesday's agreement comes after a tour of the facility by the taxi association representatives and a team from the TA.

It also came a day after taxi operators plying the Oracabessa (St Mary) to Ocho Rios route protested against efforts by the police to get them to use the transport centre.

"We have agreed that we are going to use it while they're fixing it," president of the 160-strong Great Pond Taxi Association, Calvin Taylor, said.

Dale Miller, president of the St Ann's Bay Taxi Association, which has more than 250 active members, said there are several issues to be addressed.

"One of our main concerns is that of inadequate lighting," Miller said, explaining that the current situation does not allow for members to use the centre in the evenings or at night.

Other concerns include insufficient shelter for commuters, one of two toilets in the male section not working, overgrown shrubbery, and a missing manhole cover.

Miller said the transport operators have also recommended that more signs be erected in the bus park, and that traffic lights at the intersection leading to the centre be changed to facilitate the increased traffic flow.

Also, the operators are calling for route taxi signs to be placed along the routes to allow drop-off and pick-up at designated points. This recommendation, Miller said, was not just for St Ann, but across the island.

"The space is not 100 per cent adequate, but the parish council promised some months ago to open the top section (of the centre) and we're still waiting on that," Miller explained.

"But we're going to use it surely, we are willing to work with the Authority. They have made note of our concerns and have promised to deal with it."

President of the Milex Taxi Association Daniel Scott said his organisation, which has a membership of 220, is willing to use the transport centre.

"Sure, we will use it if everything is in place. There needs to be some semblance of order, so as long as they keep their end of the bargain, I can see no reason why we shouldn't use it," Scott said.

In the meantime, chairman of the St Ann Parish Council, Mayor Ivan Anderson, told The Gleaner that the main concern of lighting for the transport centre is to be addressed shortly.

The council, he added, is actively seeking assistance from corporate Jamaica to provide more sheds in the centre.

"We will do what is required," Anderson promised.