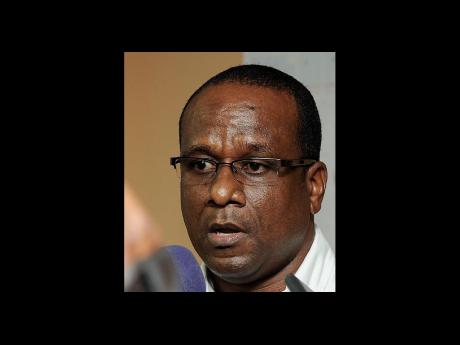 Jamaica Football Federation general secretary, Horace Reid, addresses the media at the federation's head office in New Kingston yesterday after a bailiff moved in on the secretariat. - Ian Allen/Photographer

The Jamaica Football Federation (JFF) suffered a scare yesterday when it managed to strike a last-minute arrangement with NVA Management after the English company once again sent a bailiff to the JFF's New Kingston secretariat with the view of recouping some of its debt.

The bailiff arrived close to midday with the intention of seizing assets belonging to the federation, as NVA Management sought to recoup some of the £12,000 (J$1.6 million) owed to them by the JFF after the ill-fated Reggae Boyz tour of England in 2006.

In the end, an agreement was hammered out after JFF treasurer Gary Sinclair managed to convince the officials from NVA Management to accept half the outstanding sum (J$840,000), with a guarantee that the other half will be paid in 15 days.

The money was taken from the JFF's payroll, meaning that the federation's ability to pay staff will be seriously affected in the coming weeks.

JFF general secretary, Horace Reid, who seemed resigned to seeing a few of the federation's furniture and other assets leave the premises after his meeting with the bailiff, explained the turnaround.

"Eventually, we got an accommodation from NVA Management, where they allowed us to pay 50 per cent of the outstanding amount and 10 per cent of the bailiff's fee. We now have 15 days to come up with the rest that is owed. We will have to hold back on salaries for staff for a while," Reid pointed out.

To make matters worse for JFF staff, eight of their peers did their last day yesterday as the body continues its cost-management exercise.

"Well, the bailiffs are here. As you know, we have had an outstanding issue regarding the English tour (undertaken) by the previous administration," said Reid.

"What is clear is the incompetence and the very unprofessional way in which that tour was managed; this is a consequence of very bad management on the part of the previous administration (JFF) that has caused not only this embarrassing situation, but one that I'm hoping will not affect the ability of the federation to function."

Moments before the agreement was met, the bailiff, Norman Brown, was intent on leaving the premises with at least a few items as he looked to honour the directives of NVA Management.

"I am here to seize as much of the assets on location here and I'm now hoping that the (JFF) management will make good on their debt," said Brown. "I'm looking at appliances, office furniture, anything - I have asked Mr (Horace) Reid to move fast so as to minimise the effect on the federation.

"They (JFF) have had quite some time, I have read about three or four documents that indicate that they have had knowledge of this for more than six months after the game," Brown added.

Last year, the JFF was ordered by a Central London County Court to settle the claim made by the event planning and management organisation, which was contracted by the Crenston Boxhill-led administration to provide certain services during the tour that saw Jamaica's senior team play friendly internationals against Ghana and England. The debt represents the cost of tickets for the Reggae Boyz's friendly international games against Ghana and England. The JFF collected the monies but never turned over the cash to the organisers.