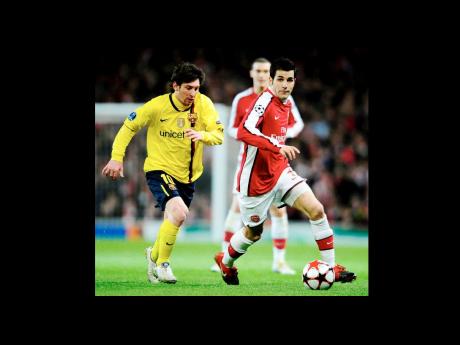 Arsenal withstood an onslaught from Barcelona to salvage a 2-2 draw and keep alive hopes of beating the defending champions to a spot in the Champions League semi-finals, while Inter Milan hold the edge over CSKA Moscow after a 1-0 win yesterday.

Barcelona comprehensively outplayed Arsenal for the first hour at Emirates Stadium and led through two goals by Zlatan Ibrahimovic before substitute Theo Walcott got a goal back in the 66th and Cesc Fabregas equalised in the 85th with a penalty.

Fabregas picked up a yellow card for fouling Sergio Busquets and is suspended for next week's second-leg match at Camp Nou, but so is Barcelona captain Carlos Puyol.

The central defender will sit out the match for the red card he earned for conceding the penalty with a foul on Fabregas, who was hurt in the closing moments and could be set for a spell on the sidelines.

Barcelona, which beat Arsenal 2-1 to win the 2006 final, are still the favourites to advance after scoring two crucial away goals. The Spanish side enjoyed a remarkable 74 per cent possession in the first 20 minutes and 62 per cent overall against a team widely recognised as the best passing unit in England.

"It was art, I believe," Arsenal coach Arsene Wenger said. "It was football, but it was art."

In Milan, CSKA Moscow goalkeeper Igor Akinfeev kept his side in the match with crucial saves, while his counterpart Julio Cesar had little to do other than deny striker Tomas Necid late on.

Milito got the crucial goal when he controlled Wesley Sneijder's pass on the edge of the area, turned quickly and shot into the corner.