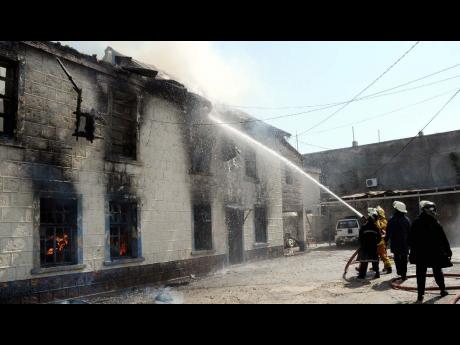 Firefighters try to extinguish a fire at the Barnett Street Police Station in Montego Bay yesterday. - Photo by Sheena Gayle

After losing several personal items and a place to rest, members of the Island Special Constabulary Force (ISCF) branch in Montego Bay will have to find another home following a massive fire at the Barnett Street Police Station.

The ISCF commanding officer for St James, Rupert Rushton, revealed that members of the ISCF would have to relocate to the Montego Bay Freeport Police Station in light of the Good Friday disaster.

"Originally, we were at the Montego Bay Freeport Police Station but we were transferred to Barnett Street, as it is closer to the downtown area and it was easier for us to fight criminal and other activities. We are disheartened by what happened here today, as several of our members lost a lot of personal items, but thankfully, no one was injured or has lost their lives," the ISCF commanding officer said.

According to Mayor of Montego Bay Charles Sinclair: "What has been impacted here is the barracks, which accommodates some 30 ISCF officers. That is something that we have to be cognisant about because it has impacted our officers in a serious way".

The fire, which began a little after 8:35 a.m., raged for almost two hours and demanded 33 firefighters from the St James Fire Department, along with seven fire trucks to bring it under control. The large contingent of trucks was necessary to prevent the fire from spreading to neighbouring commercial buildings.

Firearms and ammunition at the station were secured and uniforms were salvaged. Service units attached to the ISCF were damaged.

The police station is over 100 years old and has been in a dilapidated state for years.

It was declared a national heritage site and, according to the Jamaica National Heritage Trust, the Barnett Street Police Station dates back to the early 19th century and is of architectural significance.

The police station featured prominently in the Montego Bay Riots of 1902. Riots played a great part in the history of the police force, as it was the first time in Jamaica that policemen marched with fixed bayonets.