Walking towards his goals 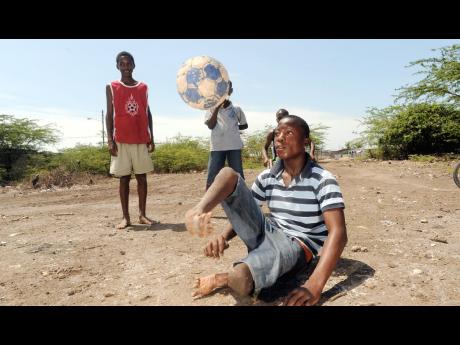 Oshane Thomas juggles a football while other youth from the Old Harbour Bay community look on. - Ricardo Makyn/Staff Photographer

Although born with a deformity of the legs, Oshane 'Bobulus' Thomas is an inspiration to many in Old Harbour Bay, St Catherine, primarily for his football skills.

"Yes mon, him kick the ball as hard as anyone of us. He plays well offensively and also in defence. The yute is just great," Shawn Harris said.

As the 16-year-old, who was born February 16,1994, with both legs deformed, sprightly jumped from a wheelchair and rushed on to an open lot to display his prowess, it was clear Thomas was not daunted by his condition.

He skilfully controlled the ball and dribbled it, using his hands to aid his movements before lifting the ball on to his chest. He then threw the ball off his chest, caught it with a leg before hoisting it into the air and catching it with his shoulder blades. Throwing the ball off his back, he was back on his feet as quick as a flash. The last act of throwing the ball over his head before turning to control again roused a small gathering to whoops and hollers.

"A big baller! Yow! Look how him do him ting wid style, a baller from birth. A same way him behave on the fiel'," Kelly Murray said, while observing Thomas.

Thomas has other interests as well.

"My aim is to become a body repairman as soon as a finish school," Thomas said.

"I learnt to play football as it helps me to remain fit. It also helps me to focus on my life," Thomas explained.

Thomas, though a young man, has also faced disappointment.

The youngster will have to find a new school.

On February 14, a branch of Children First in Old Harbour closed its doors.

Children First is an organisation which teaches students with learning and physical disabilities and was the school Thomas went to.

Despite the setback, Thomas said he was determined to achieve his goals.

According to Thomas, a resident of Bay Bottom in St Catherine, he only needs the opportunity to succeed.