Dewar to debut in Ja-Ireland clash 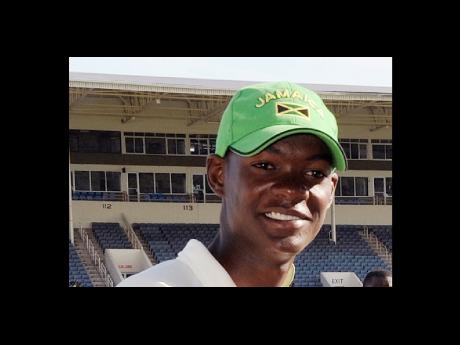 The Kensington Cricket Club and Kingston College 18-year-old, who guided Jamaica to the regional Under-19 double last season, and the West Indies Under-19 to the semi-final of the ICC Youth World Cup in New Zealand, appears set to play after the national selectors left out leg-spinner Odean Brown from the 13-man squad.

It is understood that Brown, who finished as the second-highest wicket taker in the recently concluded WICB four-day championship - a spot above his third-place finish in the 2008/09 season - is being rested to give Dewar some exposure.

Brown, 28, is expected to be recalled for the 50-over and the Twenty20 versions of the festival, which will be played at Port Rhodes Sports Club (formerly Kaiser Bauxite) and at the Trelawny Multi-purpose stadium.

"We haven't looked at the wicket as yet to determine the final 11, but chances are he (Dewar) could get his first cap," said Jamaica's captain, Tamar Lambert.

Dewar, whose strength lies in bounce and turn and is capable of bowling the googly, is expected to join off-spinner Bevon Brown as the two specialist spinners in the squad, with part-time off-spinner Lambert providing back-up.

The bowling department is expected to be rounded out by fast bowlers Andrew Richardson and Andre Russell, and all-rounder David Bernard Jr.

In the batting department, much will be expected of attacking opener Danza Hyatt, who scored a century against Trinidad and Tobago in the decisive WICB four-day Championship fixture, Brenton Parchment, Donovan Pagon, Lambert, wicketkeeper Carlton Baugh Jr and young sensation Horace Miller, who also featured prominently with a half-century against Trinidad and Tobago, on debut.

Young batsmen John-Ross Campbell and Nkrumah Bonner round off the 13-man squad.

"Winning is a habit and the plan is to go out there and get the job done," said Lambert.

"It's a great opportunity, especially for the youngsters in the team to parade their skills and hopefully, it being a holiday weekend, we will entertain the spectators," he added.

Ireland, which is coached by former West Indies opener Phil Simmons, will feature eight players from their 2007 Cricket World Cup squad that surprised the world here in Jamaica, with a preliminary victory over Pakistan.

"One of the main objectives of participating in the Festival is to prepare for the World Cup, where we believe we can beat England or the West Indies at least and qualify for the quarter-finals," said Ireland manager Roy Torrens.

The West Indies and Canada, who will also compete in the festival, are due to arrive today.