doctor's advice: Will a tilted womb affect my chances of reproducing? 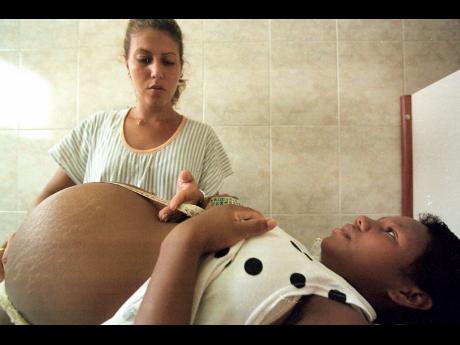 Q Doc, I have a tilted womb. Will I be able to have children?

A Having a tilted or tipped womb is extremely common. It is just a minor variation of normal, like being left-handed. The medical term for it is 'being retroverted'.

So being tilted is no big deal. Usually it causes no symptoms at all.

Retroversion does not affect your sex life, and you should be able to enjoy sexual intercourse and love play without difficulty.

However, there is some evidence that retroverted women may find it slightly more difficult than average to become pregnant.

Nevertheless, I have seen many dozens of women with tilted wombs who have conceived successfully.

There is a group of American gynaecologists who think that a female who has a retroverted womb will improve her chances of conception if she has sex while face down, or in a kneeling position. That makes the cervix (or 'neck' of the womb) dip into the pool of sperm which collects at the upper end of the vagina after the guy has climaxed.

Q I am a male university student, aged 21. Last week, I had a nasty experience while I was kissing a girl. Suddenly, she grabbed my erect organ and twisted it.

Since then, it has felt really painful. Could I have sustained serious injury, Doc?

ATwisting the erect male organ can be very painful indeed. Occasionally, the twist causes a fracture of the penis, in which the internal part of the organ actually breaks.

It does not sound to me as though your injury is as serious as that. Nevertheless, have a doc check you out just to make sure that all is well.

QDoc, I'm 20 years old and female. I recently had unprotected sex with my boyfriend about 10 days before my period was due.

I should have had my menses about two weeks ago now, but it hasn't arrived. I haven't done a pregnancy test.

What are the chances that I might be pregnant?

A Well, I'm afraid they are very high. Unfortunately, you had sex at a time of your cycle when you were probably still fertile, about 10 days before a period was due. And now your menses are more than two weeks overdue.

I would say there must be at least an 80 per cent chance you are pregnant. However, as you correctly stated in a section of your email I have not published, periods can be delayed by such factors as stress or anaemia.

Nevertheless, the only sensible thing for you to do now is to do a pregnancy test as soon as possible. I wish you well.

QI may seem naïve, but I want to remove any shadow of a doubt.

While preparing to have intercourse with my girlfriend recently, I discovered that her vagina smelled of latex condom.

Later, when I questioned her fidelity, she swore that she had been faithful to me. She could not explain my discovery. I noticed, though, that she didn't even try to suggest that I was mistaken, or imagining this.

Is there any reason, medical or otherwise, for the vagina to smell like a latex condom, even if the woman has not used one?

A I don't think anyone has ever asked me this question before! I would suggest to you that there are many natural odours in the region of the female sex organs, and some of them may mimic other things. For instance, sometimes the vagina can smell like fish, or shellfish, or plastic.

My guess is that you have merely detected some natural odour from your girlfriend's private parts, and have interpreted the smell as being that of a condom. Indeed, I am very doubtful that the smell of a real condom could persist around the vaginal area for very long.

As far as I can determine, no scientific studies have been done on this matter, but I do not think that the aroma could last for more than an hour or so.

My advice to you is to regard what you detected as a natural phenomenon, not as evidence of unfaithfulness.

QLast week, I was sprinting against another girl with whom I train. Suddenly I felt something like a bang in the back of my thigh.

Immediately, there was intense pain in the rear part of my leg, just below the buttock, and I had to stop running. It still hurts. What are the possible reasons for these symptoms?

AUndoubtedly, you have torn your hamstring muscles, which run down the back of the thigh. That is real common in runners. It is often referred to as a pulled muscle.

This will get better, but it may take several weeks. In the meantime, you should see a doc, a physiotherapist or a sports masseur.

If it ever happens again, the best things to do are these:

Immediately stop what you are doing.

Lie down, with the leg elevated.

Get someone to apply a bandage to your thigh to compress the injured area.

Apply some ice (wrapped in a towel, in order to protect the skin).

QI thought that my girlfriend was bleeding after sex. Now I've discovered that the bright red blood is coming from me.

It seems like it originates just inside the little hole at the end of my organ. Is this some kind of VD?

ANo, it isn't. There are several possible causes, but the most likely thing is that you have a little wart (medically termed a papilloma) just inside your urinary opening.

Obviously, you must see a doc in order to have this diagnosis confirmed, but my guess is that the problem can be cleared up with some simple and painless treatment. Do not have sex until you are cured.

QYesterday, I managed to have sex with three different girls. But today, I find that my organ is swollen and puffy, and about twice its normal size.

AFirst, it is not a good idea to have sex with three girls in a day. Second, it is likely that you have an oedema. That means fluid which has leaked into the tissues. In this case, it is caused from prolonged friction.

The swelling should go down within a few days. Till then, please do not have any sex.

Email questions for Doc to saturdaylife@gleanerjm.com.